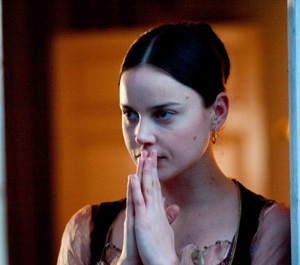 Think of Fanny Brawne as the Carrie Bradshaw of Hampstead, England. Brawne, played by Abbie Cornish (Stop-Loss) in Jane Campion’s Bright Star, is a talented seamstress who prides herself on her forward thinking fashion sense. What’s fascinating is watching a woman so devoted to fashion, slowly disrobing her soul in the most provocatively chaste way. The film, set in the 19th century, tells the story of the enrapturing love affair that defined poet John Keats’ short life and much of his work. He was a penniless, slowly dying poet; she, a headstrong, spunky young woman blindsided by his talent and mysteriousness.

The film opened to critical acclaim in 2009 and arrives on DVD, with three behind-the-scenes featurettes and a deleted scene, on Jan. 26, amid an award season many feel Cornish should be a heavier contender in. To fete the film’s DVD release, a party was thrown on Jan. 12 in Cornish’s honor at the Stella McCartney boutique in Beverly Hills, a tip of the hat to the major role fashion plays in Campion’s piece. Among the revelers were Ryan Phillippe, Carla Gugino, who co-hosted the event, “High School Musical” star Vanessa Hudgens, Marley Shelton, Jena Malone, Jamie Chung and Mia Wasikowska, who stars as Alice in Tim Burton’s new film, Alice in Wonderland.

At the center of the soiree was Cornish, her hair falling in beachy, mermaid waves over the black lace of her fitted, short-sleeved dress. Although she said she was “really excited” about the DVD release, she quickly shrugged off any mention of awards buzz or hopes of earning a nomination for her critically acclaimed turn.

“You know, what will be, will be,” she shrugged. “It’s just so great to be here tonight with people I really care about and be on the end of making this film. It’s very strange, you make a film and, while you’re shooting it, you have no idea about what’s going to happen with it or how someone will perceive it. Then, finally, when you’re on this end, it’s such a beautiful thing because you get to let it go and see what happens.”

Speaking of beauty, standing in McCartney’s space, surrounded by the delicate sequins of glittering navy cotton blend mini-dresses or punchy Miami Beach-printed, wide-legged crepe silk jumpsuits, a moment had to be taken to pay homage to the designer who’d opened her doors for the evening. “I love [Stella] and I love her work,” Cornish gushed.

But it’s not just McCartney’s style Cornish admires; it’s also her stance in the fashion world as a vegan who refuses to use any animal products. In an industry that seems to have very little consciousness about where and how clothing is made, McCartney is a leader, an inspiration and a lifesaver for the fashionable who prefer their shoes not come from a poor dead cow.

“For me, being a vegetarian, I don’t buy leather or fur, so it’s the perfect venue and the perfect person to have hosting the event,” Cornish nodded.

Since Brawne was such a fashion plate, you have to wonder where Cornish draws her style inspiration from. Asked if she could exist in any particular fashion era, she broke into a wide grin, mulling the idea over.

“Ummm, the ’60s are pretty awesome,” she finally decided, though she couldn’t choose between the early Betty Draper years and a later “Laugh-In” vibe.

When it was brought to her attention that she was in the home of some of the most beautifully constructed pseudo-vintage disco queen jumpsuits in the City of Angels, she lit up.

“I know!” she cooed. “Jena [Malone] has one on now and she looks so gorgeous! They’re really great.”

Bright Star is currently available.
Article posted on 1/19/2010
This article has been viewed 2222 times.