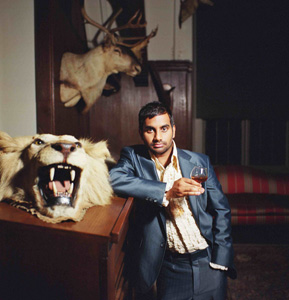 Aziz Ansari is not only funny; he's a foodie.
(Credit: Courtesy of Comedy Central)

How cool is Aziz Ansari? If there were a meter to measure it, he would be off the Richter Scale. I’m not trying to be sycophantic, but considering his eagerness to do this interview coupled with his humble sincerity, you can’t help but to love him. There really isn’t a topic that’s off limits to this engaging comic.

During our interview, I get a little glimpse into the life of Aziz Ansari. For those of you who aren’t familiar with him, you will be very soon. He plays Tom Haverford in “Parks and Recreation” on NBC with Amy Poehler and steals every scene when he appears on screen with his man whoring humor. You may have seen him most recently in Funny People with Adam Sandler and Seth Rogen, or the Funnyordie.com parodies of his character RAAAAANDY. His resume credits are rapidly growing, but definitely not his ego.

Ansari has accomplished so much more than your average 26-year-old.

“It’s kind of like running a marathon. You keep working to continue putting out good stuff, and you’re never really done,” states Ansari. “You just want to get to the next level.”

While majoring in marketing at New York University, he started doing stand up and improv on new talent nights around the comedy circuit in the city. After graduating, he and a group of his friends who did improv/comedy sketches got their big break.

They created and starred in the critically acclaimed show on MTV called “Human Giant.” This show turned out to be a cult success, but was short-lived after only two seasons because many of the cast members, including Ansari, were offered big career opportunities. Ansari even broke down and made the move from New York to Los Angeles.

“I moved to L.A. in February of last year because there are just more opportunities in the film world,” he explains. “Especially after getting ‘Parks and Recreation,’ it has given me even more opportunities like the projects I’m working on with Apatow.”

That’s Judd Apatow, writer/producer of Knocked Up, The 40-Year-Old Virgin and Funny People.

“I also recently wrapped up my Glow in the Dark Tour, which was really exciting,” claims the comedian. “It’s actually the same title as Kanye West’s tour. I had to get his permission, which I wasn’t so sure about, but he’s a huge fan of comedy and was really cool about it. He even stopped by the show, which was great.”

“I [just did] a comedy show on Comedy Central, Intimate Moments for a Sensual Evening, which I’m super excited about,” says Ansari.

“That is the material I did on the Glow in the Dark Tour, which contains material about Harris and Darwish, my cousins, and a chunk I do with RAAAAANDY from Funny People. This is my first special, and I’m really excited about it.”

For those of you who don’t know, Harris and Darwish are Ansari’s 15- and 18-year-old cousins who have been at the center of his jokes.

“I think their friends see me talk about them, and it’s exciting for them. I’m making them popular with the ladies,” Ansari laughs. “I never say anything mean, so we all have fun with it.”

As we wrap up our interview, Ansari tells me he’s on his way to Langer’s Delicatessen. Aside from being hilarious, he’s a foodie! This is a man after my own heart.

We end our conversation talking not about film, his career or his future, but food. Ansari reveals to me the inspiration behind his current eatery outing.

“[There’s] a foodie message board, and they do a survey of must-eat places and Langer’s was No. 1 for pastrami sandwiches,” he explains. “I was so down to grub!”

“I’m off to Tokyo tomorrow,” he continues, “so I’m getting all these great food recommendations from my friends, and really getting sushi inspired now.”

He then asks me to reveal my top four places to eat in Los Angeles, and I discover we actually have some spots in common. I, of course, reciprocate and ask him his top spots. He recommends a few new places, which I’m eager to try.

“My Italian place of choice is Osteria Mozza. It’s a commitment, but worth it,” Ansari says.

Ansari is on a roll, and there is no stopping his comedic genius. He is currently working and developing three new projects with Apatow. It’s very clear we will be seeing a lot more of Aziz Ansari in the near future.