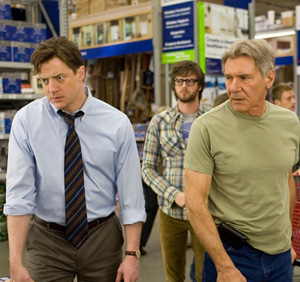 It’s a rare occasion in the entertainment industry that we stumble upon a film whose story actually happened. We’re not talking some sort of “inspired by” nonsense here. For all intents and purposes, the rather wild and crazy events that are portrayed in Extraordinary Measures took place in real life.

Based on a novel (which is based on a true story) called The Cure by Geeta Anand, Extraordinary Measures tells the story of the Crowley family and the rather incredible circumstances that led to the discovery of a treatment for Pompe Disease, a rare disorder that disables the heart and muscles.

John Crowley, played by Brendan Fraser, is merely doing his best as a father who knows full well that two of his children will more than likely die before the age of 10. He manages to stumble upon some research by an eccentric Dr. Robert Stonehill, played by Harrison Ford, who theorizes that a treatment for Pompe is not just possible, but downright feasible. The two embark on a battle against the pharmaceutical industry as they bite and claw their way toward saving John’s children.

Ford and his production company first heard about the story in the Wall Street Journal.

“I read the book and thought that there was a germ of a good idea for a movie. It was something different to what I am normally involved in and a chance to build an interesting part for myself.”

Writer Robert Nelson Jacobs, whose previous works include the delightful Chocolat, notes that “it was great to have Harrison on board before we started writing. It gave us a chance to sit back and figure out what we wanted his character to be about.”

The character of Doctor Stonehill was an interesting conundrum for Jacobs. “It’s always tricky doing a true story. We had a well-researched, 350-page book and we really had to pick out what the emotional points in the story were that we wanted to capture. There were so many characters involved and we had to develop a composite character that expresses all the points that were important in the path that John Crowley and Dr. Stonehill had to ride on.”

Because Stonehill wasn’t an actual person in history like John Crowley, this enabled Ford and screenwriter Jacobs to have some fun.

“Because the character is fiction, we had the opportunity to make him up out of the things that help tell a story. We wanted to create both ally and antagonist for John. We wanted John to reach out to this awkward guy out of desperation and Stonehill is a difficult character. I didn’t want to do the conventional scientist.”

Fraser, on the other hand, spent much time with the actual Crowley family and their children who had Pompe.

“When I actually met them, I really had a true appreciation for just how fragile these children are. They’re in wheelchairs and on life support systems. However, one thing it does not affect is the mind.”

Ford prepared for his part quite differently, noting that, “Stonehill was a scientist and didn’t see patients. He simply wasn’t comfortable with meeting sick people. I spent my research time with researchers trying to figure out ways to get science, which is something in the mind, out onto the big screen."

This struggle to balance the scientific intelligence with mainstream understanding proved to be a tricky point. How the two would end up meeting was a matter of luck and motivation.

“What we ended up believing is that a desperate man would eventually seek out a person that had the passion and conviction that Stonehill had,” says Ford.

It’s all a case of desperate times and even more desperate measures for Crowley but, as he states in the film, “sitting back and watching my children die is simply not an option.”

Regardless of what side of the fence they were on, each character in Extraordinary Measures has motivation to save these children. The motivation may be financial or personal, but passion is definitely the word of the day.