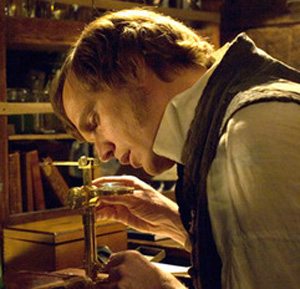 I went into this movie thinking it would be about the animals. Charles Darwin closely studied dozens of them, most famously the finches. That’s what he is known for. That and a little something entitled On the Origin of Species, but that’s beside the point.

Because the point is, like every historical figure that has been spoon-fed down my throat since the third grade, I’ve learned minimal information about their personal lives.

Well, I was deeply disturbed when I learned that Charles Darwin lived most of his life with immobilizing fits of stomach cramps, fatigue and psychological ailments.

In Creation, Darwin (Paul Bettany) is a loving, though often scatterbrained, husband to Emma (Jennifer Connelly), who also happens to be his first cousin. They have a beautiful family with a seemingly endless amount of children. Darwin loves his eldest daughter, Annie (newcomer Martha West), the most because of their dovetailing interest in the sciences.

However, Annie soon becomes incurably sick and dies. The trauma of losing her hits Darwin like the plagues in the Old Testament when he starts seeing her ghost regularly.

The film jumps back and forth in time. We are given glimpses of Darwin as a young man in the prime of his life, and we get a Darwin who is literally falling apart, balding and nearly a corpse.

To add to his stress, the famed scientist is under intense pressure by colleagues to publish a book about his scientific endeavors. It is in Darwin’s heart where the battle plays out. Torn between faith and reason, as well as Emma’s strict religious beliefs, he is only set free by the memory of his beloved Annie.

Based on the novel Annie’s Box written by Randal Keynes, Darwin’s great-great-grandson, the film is extremely dark and completely invested in the scientist’s twisted psyche.