Shades of White: Why We Buy Where We Buy 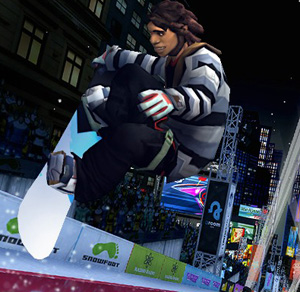 Fans of classic, comic snowboarding games like “SSX” will have quite a bit to love from “Shaun White: World Stage” for the Wii. The game introduces Shaun White, but quickly removes the snowboarding superstar to give the player the experience of turning a rag-tag group of goofballs into professional boarders worthy of racing against their celebrity buddy. Each boarder has his or her own strengths and weaknesses, making character and partner choices as important as speed and trick mastery.

Needless to say, playing on the Wii adds quite a bit of energy to the action sports title. This experience is enhanced even further when you have some of the Wii’s wide array of accessories. While you can always play using the regular controllers, the game becomes an involved, intensely fun experience when you play using the Wii Balance Board. In a truly inspired move, you can also create your own unique custom tricks by accessing the Trick Machine and spinning your snowboarder with a Wii MotionPlus-enabled controller.

Of course, not all copies of “Shaun White: World Stage” are created equally. If you go to a Fry’s or a Best Buy, you may get a good price, but true snowboarding fans would be missing out on a disc’s worth of action. Those who do their homework will find a separate DVD featuring the globe-trotting antics of the real Shaun White if they buy the game from a Target store. While the wisdom of including a DVD with a game from a console that doesn’t play DVDs may be a bit questionable, it is still a great collectable for fans of Shaun White and snowboarding in general.

Bonus incentives are nothing new, but many non-gamers seem to realize that just going to the local electronic entertainment shop for the newest games may mean missing out on half of the game. Store-specific special edition copies often sell for the same or similar prices to regular editions, but they are few and far between. Fortunately, there are other ways to get more from your games. To make sure that you aren’t missing out, here are some gaming goodies to keep in mind.

If you know that you are going to buy a game that you have had your eyes on, try talking to your local game store clerk about pre-order bonuses. By paying anywhere from five dollars to the full price of the game in advance, some stores will give you special incentives direct from the game’s developer. These incentives can be anything from early demos of the game and in-game items to T-shirts, comic book preludes or even collectables.

The downside of pre-orders is that you are locked into the price they are offering. While there is a typical rule that new, big name Wii games run for about $49 while Playstation3 and Xbox 360 games go for about $59, many stores will offer special pricing for the first couple of days that the game is available. By tying yourself down to an early price, you may be losing out on the big deals. Your best bet is to do your research, and if no amazing prices come up in your search, convince the clerk to let you do a last-minute pre-order. Of course, make sure not to delay too long or you may end up with nothing.

If you don’t mind spending a bit more, collector’s edition versions of games can be a great way to get more out of your game. Companies that put out special collector’s editions believe that players are already so interested in their title that they will want to own more than just the game. Traditionally, this means that games are packed in special casing and packaged with unique collectables that can’t be purchased on their own, but modern titles also offer exclusive downloadable items or free downloads of content that can cost $10 from the download store.

Either way, just remember to be smart and thorough. If you do your homework, you can get so much more out of your games.

Games & Gadgets
Gaming against sexual assault, with 'Decisions That Matter' and other video games
1,486 views