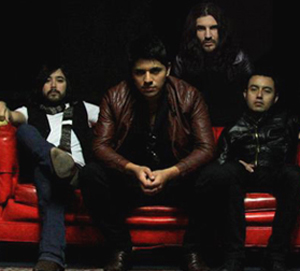 On the seventh day of the Viper Room’s “Ten Days of 2010” celebration, the Tender Box took the stage to a near-packed house on a very energetic Thursday night.

Dressed in mostly all black, these East Los Angeles natives tore through their signature dancey/epic balladry sound that has landed them on a European tour with the Goo Goo Dolls and unofficially ranked them Canada’s answer to the band Phoenix, when it comes to car commercials. (The Tender Box song “Mister Sister” was featured in a 2007 Chevrolet television commercial in Canada, leading the band to a Canadian Fontana/Universal Music contract due to the overwhelming response to the song’s placement.)

Throughout their short set, the Tender Box blew through tracks from their debt full-length The Score and their most recent release, E.P. 1. The band opened with the upbeat “Beautiful Sin” and without hesitation, busted right into “Incomplete Design,” only allowing enough time for singer-guitarist Joey Medina to quickly shout the title before the song took off. “Incomplete Design”– an epic breakup song – captured the audience with its subtle atmospheric verse that exploded into a fist-pumping chorus that jarred the room through its hollow floors. This Tender Box original is a song that could ultimately give Coldplay a run for their money.

The most satisfying song of the night, “Mister Sister,” from its very beginning immediately sent the small room into a bouncy, chest-thumping dance party. The song ended in a wailing, noise-induced outro laced with sweat and plenty of guitar-god moves that made a perfect ending to an energetic set.

The Tender Box “army” was unquestionably satisfied with this short but sweet set. The rest of the audience, well, they wanted more, too.

Paper Zoo, also on the bill, enchanted the room with its unique blend of ’70s pop nostalgia.