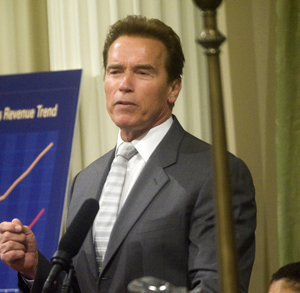 In his monthly report for Dec. 2009, released Jan. 7, State Controller John Chiang announced that California’s cash balance was $202 million below its projected level at year’s end, with year-to-date revenues $353 million below FY 2009-2010 budget estimates. According to Governor Arnold Schwarzenegger, who announced his state budget proposal for FY 2010-2011 on Jan. 8, the shortfall in California’s state budget is now projected at $19.9 billion for the coming year, largely due to $3.4 billion in lower revenues, $4.9 billion in court decisions and litigation and $2.3 billion in lost savings, to which the Governor credits “the smaller prison package that the legislature has passed.”

Schwarzenegger breaks down the projected amount, noting a $6.6 billion shortfall leftover from FY 2009-2010, a year in which California’s economy fell 2.8 percent, as well as an additional projected gap of $12.3 billion in FY 2010-2011 due to unfunded mandates and a continuation of the present recession, and the $1 billion that California requires as a modest reserve.

Much of the state’s budget crisis rides on whether we are to receive the $6.9 billion in federal funding Schwarzenegger claims is due. According to the Governor, California is owed $1.8 billion for Medicaid; we receive the lowest possible amount of federal funding, a match of 50 percent under the Federal Medical Assistance Program (FMAP) formula, whereas the average for the 10 largest states is 57%, which more closely reflects with the national average. The Governor also points out that California is owed an extension in American Recovery and Reinvestment Act (ARRA) funding to the tune of $2.1 billion, as well as $1 billion for federal education mandates related to special education. $879.7 million in federal funding is to be applied to the incarceration of California’s undocumented immigrants.

Should the federal government not provide the $6.9 billion in funds owed to the state, the Governor’s proposed budget includes a number of cuts and reductions intended to increase revenue, but his solution is a proposal that – as has become standard prior to the official budget passing each year – threatens public programs utilized by those who are most in need, and compensation for those who work directly for the state.

The Governor’s office skillfully crafts the statement that state employees will “continue their contribution to solving our State budget crisis.” This careful wording refers to the cuts they will suffer after mandated furloughs, set in place during February of last year despite opposition from Chiang, and scheduled to end June 30, are to be replaced beginning July 1 with a five percent salary reduction, five percent increase to CalPERS monthly pension contribution and five percent payroll reduction.

His proposal would most deeply affect health and human services ($2.9 billion in potential cuts, including $1.1 billion in Medi-Cal reductions, $950 million to in-home supportive services and $130 million to CalWORKs), employee compensation ($1.6 billion) and the state prison system ($1.2 billion, including $811 million in cuts to the prison healthcare system, which would make California’s system, the Governor claims, more comparable to New York).

The aforementioned proposed cuts include complete elimination of CalWORKs (temporary welfare for families), In-Home Supportive Services (for the blind, disabled and seniors over 65), Healthy Families (healthcare for children in low-income families) and the Transitional Housing Placement for Foster Youth Plus Program. Also proposed are a reduction of Medi-Cal eligibility to the minimum allowed by federal law, elimination of many optional Medi-Cal benefits and zero room for enrollment growth throughout the University of California and California State University systems.

Schwarzenegger is calling upon legislature to start new cuts in the current fiscal year, but maintains that not all major focuses of the General Fund will be reduced or eliminated, noting an exception in education. The Governor wants to bring a focus back to the state’s K-14 public education system by fully funding Proposition 98, which aims to reduce class size without raising taxes. He intends to allow the system to maintain all funding from the previous fiscal year, but enforce enrollment caps on the public university system in order to avoid further fee increases so that the university system remains competitive and attainable for those eligible or previously enrolled. While this would prevent tuition and fees throughout the university system from hiking drastically, it may also make university-level education more difficult to obtain for some residents.

Should the state not receive funding from Washington, under the Governor’s proposed budget, a major portion of the state population would be financially devastated and without crucial care. Revisions to his proposal are expected by mid-May.