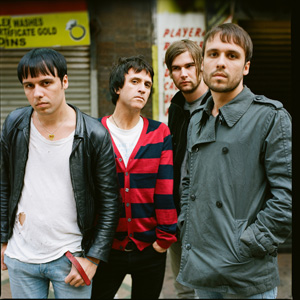 U.K. indie rock sensations the Cribs have quite the cult following in their homeland. Now, they’re bringing their raucousness to the States with a North American tour in support of the release of their fourth studio album, Ignore the Ignorant.

The album follows up their Warner Bro.’s debut, Men’s Needs, Women’s Needs, Whatever, with a drastic change in the band’s DNA. The former all-in-the-family trio – fraternal twins Ryan and Gary Jarman on lead, bass and vocals, and younger brother Ross on percussion – recently added legendary guitarist Johnny Marr to their roster.

The quartet arrives stateside this month, kicking off at Lincoln Hall in Chicago. No stranger to the United States, the Cribs previously toured the continent alongside Death Cab For Cutie and Franz Ferdinand and hit the stage at both Coachella and Lollapalooza.

Gary Jarman has even moved out west and currently lives in his adopted hometown of Portland, Ore. There, he was first introduced to Marr, a part-time PDX resident, at a barbeque hosted by Marr’s Modest Mouse.

“He told me he was a fan of the Cribs,” Gary recalls. “It sounds arrogant, but it was the first thing he said to me.”

Gary later introduced Ryan and Ross to the Manchester-born guitarist offstage at Glastonbury when both the Cribs and Modest Mouse played the festival in 2007. Drummer Ross Jarman recalls being a bit star-struck when meeting one of their idols.

“We had a picture of Johnny on our fridge in our tour van for a long time.”

That meeting sparked a friendship built on mutual admiration, and before long Marr was spending his free time playing with the Jarmans.

“We had a big stretch of time off,” recounts Ross. “We were all together because we were friends, and we’d been hanging out. So, why don’t we get together and write some music, because that’s what you do when you’re friends, you know, people just jam.”

In the midst of those sessions, Marr soon found himself playing the role as the fourth Jarman brother.

“Eventually the penny dropped,” Ross recalls. “It was one of them weird things, it happened so naturally. We never intended it. It is kind of like when you start seeing a girl.”

A very experienced girl, that is. Marr’s illustrious past includes co-founding the Smiths, playing for the The, Modest Mouse and Electronic, and being a featured musician on countless albums including classics from Talking Heads and Beck. His addition to the Cribs has significantly pushed the band’s already impressive envelope of rock ’n’ roll prowess.

“It’s made everything really exciting again. It’s like having a new best friend,” explains Ross.  “Instead of it just being the three of you, and going on the road and getting in trouble, there’s like four of you now.”

The Cribs’ new indie punk album indeed feeds off of that new excitement. Marr’s sound is integrated flawlessly while bringing his tinge to songs like “Cheat On Me” and “We Share The Same Skies.”

Other tracks, including “Hari Kari,” are classic Cribs, only now on Johnny Marr steroids. The title track sees Marr’s Rickenbacker blasting out a riff instantly introducing himself to the Cribs’ world.

“The other records have always been criticizing someone else,” Ross details. “But with the new one, it seems to be self-critical.”

Songs like “Save Your Secrets” and “Stick to Yr Guns” reveal a newfound reflective tone in the Jarman twins’ songwriting.

“Gary and Ryan spent a long time over the lyrics on this new one, and they’re a lot prouder of them than any of the other records we’ve done,” Ross explains. “I think they did a good job.”

Speaking with Ross, it’s easy to see that the Cribs won’t compromise or sell out anytime soon. Their authentic sound is an evolution of, rather than departure from, their lo-fi roots. When asked about the future of the Cribs, Ross casually responds: “We’re just going to keep releasing records, and you know, doing it the organic way.”

The Cribs will perform Jan. 26 at the Glass House. For more information, visit thecribs.com.