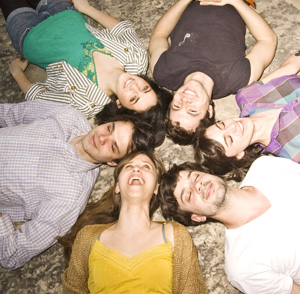 Two previously unreleased tracks recorded during the sessions for Dirty Projectors’ Bitte Orca album are out as a limited edition 7-inch vinyl single. “Ascending Melody” and “Emblem of the World” are also available as a free download at dirtyprojectors.net. Dirty Projectors play with the L.A. Philharmonic at the Walt Disney Concert Hall Feb. 27.

Rival Sons are busy recording a new album, the follow-up to their debut, Before the Fire. The L.A.-based rockers are previewing some of the new songs during their Sunday night residency at Cinespace in Hollywood where you can get in free before 10:30 p.m. and even grab a free vodka drink between 9:30 p.m. and 10:30 p.m. The offer is good for shows on Jan. 24 and 31.

The 18th Annual Noise Pop Festival takes place in San Francisco from Feb. 23 through March 1. The event is held at various venues and features an opening night performance from Yoko Ono Plastic Ono Band with Cornelius, Yuka Honda and Sean Lennon. Some of the other acts participating this year include Deerhoof, !!!, We Were Promised Jet Packs, John Vanderslice, Magnetic Fields, the Growlers and Nico Vega.

The Dodos and Magik Magik Orchestra will collaborate for a one-time only show where the two entities will perform new arrangements of 10 Dodos songs.

The festival includes a mini-conference called Industry Noise where attendees can listen to influential speakers, meet industry pros, learn about current opportunities and even arrange for individual mentoring. Festival badges are on sale now for $150 with Industry Noise badges being an additional $65. Find more info and the complete talent lineup at noisepop.com.

Fred Ho and the Green Monster Big Band have turned loose their latest epic, Celestial Green Monster. That sounds like something you might find aboard an errant spaceship, and truth be told, Ho, a giant of a man leading the jazzy 17-person band with his baritone sax, is a little bit out there.

If a listen to Ho’s 16-minute version of Iron Butterfly’s “In-A-Gadda-Da-Vida” doesn’t convince you of that, his reasoning for recording the psychedelic opus will: “I thematically wanted to explore the journey of humanity’s ascendancy on this planet and the dark rise of class and gender stratification as an outgrowth of the human conquest, domination and primacy over the natural world.”

Or maybe he was just having fun dressing up the song with guest Haleh Abghari’s Persian vocals and assorted growls referred to as “Mastodon and Sabertooth” vocals. Celestial Green Monster is available now at mutablemusic.com.

EMI has teamed up with the Recording Academy’s Grammy Recordings to release 2010 Grammy Nominees, a 20-song collection highlighting artists and songs nominated for the 52nd Annual Grammy Awards. The set is packed with smash hits like “Poker Face” from Lady Gaga, “I Gotta Feeling” by the Black Eyed Peas and “I’ll Go Crazy If I Don’t Go Crazy Tonight” by U2.

Coldplay, Green Day, Sugarland, Zac Brown Band, Pink, the Fray, Kings of Leon and Adele are among the other contributors, and best of all, a portion of the proceeds from each sale will go to charity. Sharing in the proceeds will be the Grammy Foundation and the MusiCares Foundation, an organization that provides assistance for music people in times of need. Nominees is out now; the Grammy Awards will be handed out at the Staples Center on Jan. 31.

Removador Recordings is the name of the new record label formed by Yim Yames (Jim James) of My Morning Jacket and former MMJ guitarist Johnny Quaid. The online platform’s mission statement is, in part, “to shine a light on some of the musicians that Yames admires and would like to share with the world. The label will also help connect the dots between an ever-growing artistic community that Yames is a part of, reflecting his eclectic taste and steadfast passion for music.”

The label has just released Boys from Nashville-based experimental artist Cortney Tidwell while efforts from Quaid’s band the Ravenna Colt and psych rockers Follow the Train will drop in February and March respectively.