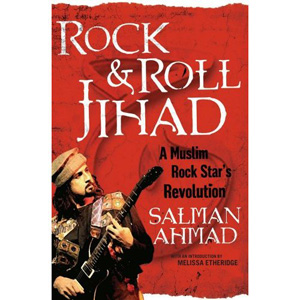 “V” for peace is indisputably one of the most ubiquitous signs around the world. Despite the extensive endorsement, only a few people are actively taking part in realizing its meaning. One of them is Salman Ahmad, the founder of the wildly popular Pakistani rock band Junoon, who found his calling in bridging the divides between Pakistan, India and America. The chronicle of his exciting and inspiring journey is published in a memoir called Rock & Roll Jihad: A Muslim Rock Star’s Revolution for Peace. Ahmad’s sincere invitation for the readers to look at the world from his point of view, a Sufi Muslim rocker, makes it impossible for readers to put down the book.

The book begins with Ahmad’s formative years, as he introduces the readers to the start of his lifelong marriage to music, the people and experiences that have influenced his outlook and beliefs in life and the resulting inception of the idea to use music as a medium to create harmony between the East and West. Deftly integrating the Pakistani culture in his narration by including Pakistani’s various words and practices, Ahmad attempts to promote cultural awareness and understanding, and has successfully done so.

Ahmad subsequently takes the readers onto the rollercoaster of his life as he fights to realize his idealism against the suffocating oppression from the government. The journey is oftentimes emotional, and sometimes heartbreaking. However, exactly because of his perseverance in the face of trying circumstances, readers will then understand how desperately Ahmad wants to fulfill his noble calling.

This book is a must-read for those people who also believe in Ahmad’s idealism, those who appreciate foreign cultures and those who want to be inspired.