“The Buried Life”: Four Guys and Their Bucket List 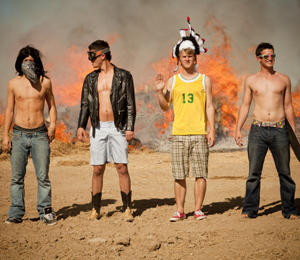 Skydive, drive across the country, swim in a tub of tapioca pudding – everyone has a list of things they want to do before they die. Unfortunately, most of us are too preoccupied with the day-to-day to really pursue our bucket list. Responsibilities are claimed and excuses given, all to keep us from chasing our dreams.

Meet Ben, Dave and brothers Duncan and Jonnie, the four minds behind MTV’s new show, “The Buried Life.” Four years ago, disillusioned with what lay ahead in their lives, the Canadian university students compiled a list of the 100 things they wanted to do before they died.

“We felt like there was something missing in our life, and we wanted to be part of something bigger,” Ben recounts. “So we wrote this list together of the things we always dreamed of doing and we decided we’re not going to wait, we’re going to go after it.”

And that was that. The guys decided to take two weeks off during the summer, borrow an RV from an uncle and take the trip of a lifetime. With a video camera in tow, the group set out across North America to start knocking pegs off of their list.

At some point on their trip, the gang hit No. 53 – “Start a television show.” Using their own filming and editing skills, the guys began to compile episodes that eventually sparked MTV’s interest.

Even with MTV’s support, when No. 95 on the list is “Play ball with Obama” and No. 99 is “Host ‘Saturday Night Live,’” it’s an understatement to call the gang’s list ambitious. But so far, the guys have yet to give us any reason to doubt them. The premiere of the show, which aired this week, shows the guys crashing a party at the Playboy Mansion.

“I still don’t even know how Playboy let us air it. It’s the craziest thing I’ve ever been a part of in my life,” Dave explains. “It’s one of those stories I tell my friends and they’re like, ‘Dude, you got to be kidding me,’ and I’m like, ‘Dude, I got the whole thing on tape, you’re not going to believe this!’”

Now, with the support of MTV and their purple bus, Penelope, the gang has checked over 70 items off of their list. But when asked about their most memorable moments on the trip, the guys don’t mention No. 40 – “Make the front page of a newspaper” or No. 94 – “Party with a rockstar.” Instead, Ben remembers a different aspect of the journey:

“When I look back over the past four years, the most memorable moments have been the times we’ve been able to help someone else.”

In true “pay it forward” spirit, the group helps a stranger accomplish one of their dreams for every thing they check off their own list. Prompting them with the simple question, “What do you want to do before you die,” the guys show that helping others isn’t only a job for the overly privileged. From reuniting a father and son to taking a group of kids on a shopping spree at Toys“R”Us, every stop on the trip is an opportunity to change a life.

“That’s kind of the balance that we’re trying to hit,” Dave explains. “We’re going after the craziest dreams of ours and also trying to help regular people along the way do things they want to do.”

That common interest in improving their own lives, and others’, is what brought the gang together in the first place.

“We got together because we had this mutual desire to do a project and put our energy towards something,” Dave recalls.

The title of the show, “The Buried Life,” is in reference to an 1852 Matthew Arnold poem by the same name.

“It talked about the exact same feeling that we were feeling at that moment in our lives,” explains Ben. “The buried life is how our daily life becomes so cumbersome that our real life becomes buried. That we all have this longing to live this hidden life, or our ‘buried life.’”

But not these guys; they’re already living it.