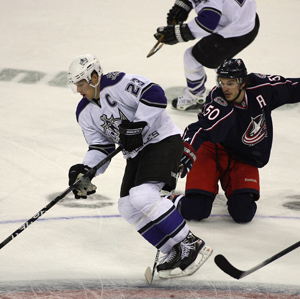 There was a time in the not-so-distant-past that a battle between two then-Smythe Division teams would easily end with a final score of 8-7. In today’s NHL, a high-powered offense is lucky to net more than four goals in a given game, as defenses and goaltenders have become savvier.

Alas, the Los Angeles Kings and Anaheim Ducks have managed to take nostalgic fans back in time this past week. While neither team is scoring eight goals per game, half as much seems to be good enough to please their respective fan bases.

For the Kings (27-18-3, 57 points), it is a clear-cut case of score four, earn two. Los Angeles is 5-3-0 in its last eight games, scoring at least four goals in four of those victories. Conversely, the Kings never scored more than three goals in the losses.

In fact, 16 of the Kings’ 27 wins have come when the club has scored at least four goals in a game. Overall, the Kings have won all 12 games where they scored five-plus and are 17-1-0 when scoring four-plus goals in a game.

Such was the case last week, with the Kings dropping a 2-1 decision against San Jose before notching victories over Anaheim (4-0) and Boston (4-3).

The surging Ducks (22-20-7, 51 points) are discovering offense is their friend as well. Anaheim won three of four games since Jan. 10, scoring three, four and five points, respectively, in the victories. In the sole loss, the Ducks were shutout against the Kings.

As the Ducks finally are healthy enough to depart the Pacific Division cellar and the Kings are holding on for its dear playoff life, it has become evident if both teams want to move forward these next four months, it is critical each team find the back of the net at least four times.