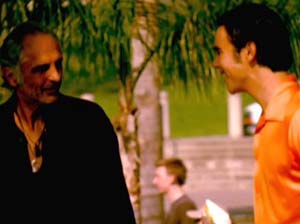 “The word[s] excessive vanity [are] never truer than when talking about an aging boy toy.” I’m paraphrasing a bit here, but that line was uttered by an acquaintance of Andrew Cunanan (played by Jonathon Trent) in the film, Murder in Fashion.

While there are many older men in the gay community who refuse to act their age, Cunanan took that mantra to a whole other extreme level. When his delusions of being a wealthy kept man and Versace model start to fall apart, he embarked on a notorious murder spree in 1997, culminating in the murder of Gianni Versace (Robert Miano) and Cunanan’s suicide in Miami.

The movie traces his steps from his breakdown in San Diego, to the first murders in Minneapolis, to his subsequent crime spree in Illinois, New York and New Jersey, which placed him on the FBI’s Most Wanted list. The film also stars James C. Burns and Stacey Dash (Clueless) as FBI agents on his trail.

In Misconceptions, a religiously conservative, married southern woman (A.J. Cook of “Criminal Minds”) receives a message from God instructing her to act as a surrogate mother for a married gay couple played by Orlando Jones (“MADtv”) and David Moscow (Just Married). Complications arise when one of the men shows up unexpectedly at her home, threatening both relationships in the process. This movie carries extra poignancy due to the ongoing political debate about the definition of family in America, as well as the issues of homophobia, racism and family values.

With the encouragement of three strong and very different women, Mrs. Martin (Karen Black), a free-spirited art teacher, his best friend, Andy (Ellie Araiza), a young girl with a severe physical impairment and Miriam (Casey Kramer), a recovering alcoholic and devoutly religious mother, Danny learns to use his creativity to transcend his grief.

Fifteen years later, Danny is faced with the possibility of losing Allan, his current lover, unless he keeps his promise to never paint the “ex” again. Though centered on a gay man’s lost love, anyone can relate to having loved and lost someone special. Also featuring Greg Louganis.

Murder In Fashion/Misconceptions/Watercolors release in select theaters Jan. 22.
Article posted on 1/20/2010
This article has been viewed 2703 times.