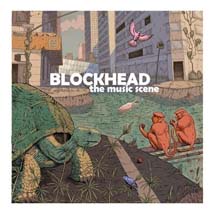 Considering he doesn’t rely on spoken words in the traditional sense to fuel his songs, Manhattan-based producer-turned-creator Blockhead still packs a punch on his new album, The Music Scene. Masterfully setting an emotional tone with a mix of hip-hop beats and classical orchestral elements, and everything in between, Blockhead created an album that feels simultaneously dreamily archaic and edgily avant-garde.

For what it is, the album sparkles in its technicality and production. Outside of this, Blockhead then faces the problem of just how memorable an instrumental album can be.

Though his music evokes a similar aural vibe to the more moody and vulnerable tracks from his sometimes collaborator Slug’s work in Atmosphere, those tracks shine on Atmosphere albums by breaking up more aggressive parts. When comprising an entire album like Blockhead’s, however, the tracks tend to lose their distinctiveness to the point that song titles seem unnecessary.

Individually, each track is a beautifully composed jam that draws on eclectic musical tastes while still feeling very cool and modern, but they’re still best enjoyed scattered over the expanse of a mixtape playlist amid other selections from some of Blockhead’s studio BFFs.


The Music Scene is currently available.
Article posted on 1/25/2010
This article has been viewed 1443 times.