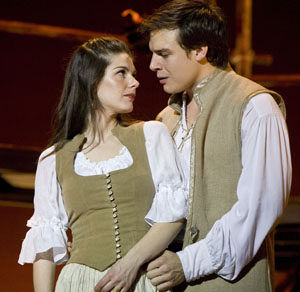 Traditionally, “Camelot” is a production made up of large sets, dramatic costumes and big casts. In short, it’s a big budget production … up until now. The Pasadena Playhouse has put on a brilliant production of “Camelot,” with minimal sets, simple costumes and a cast of only eight.

Directed by David Lee (the co-creator of “Frasier”) and starring two players from the National Tour of “Camelot” (Shannon Stoeke as Arthur and Shannon Warne as Guinevere), this incarnation of the 1960s musical is clever and resourceful in its use of props and sets. The play really benefits from the casting, as all of the actors have strong voices that alternatively hold their own in solo, and meld into perfect harmony in chorus. Oh, and Lancelot (Doug Carpenter) is hot. No, seriously, he should be in a calendar. And he takes his shirt off for the audience!

Fans of “Camelot” in its original (and long) format, however, might be surprised at how much Lee has pared down the script, while still managing to leave the essential storyline intact. In fact, Lee’s version allows for the inclusion of songs that are usually cut (“Fie on Goodness” and “Then You May Take Me to the Fair,” for example) and brings the dichotomy between Arthur’s philosophical dilemma and Guinevere and Lancelot’s dalliance to the forefront.

My only problem with this little gem of theatre is actually in the play’s designation as a musical. By definition, a musical should be cheerful and happy, and while “Camelot” does start that way, halfway through the production, the tone completely changes. Just before intermission, “Camelot” suddenly turns into “Othello” or “Hamlet.” I suppose I should have guessed, considering the well-known fact that Arthur, Guinevere and Lancelot’s epic love triangle was always supposed to end badly, so in the end, I’m taking issue with the original script and not with the Pasadena Playhouse’s inventive production.

But when you’re prepared for a storyline that suddenly turns from bright and merry to tear-jerkingly somber in just a few, whiplash-inducing minutes, “Camelot” is in turns enjoyable and philosophical, with an impeccable cast and crafty technical production.