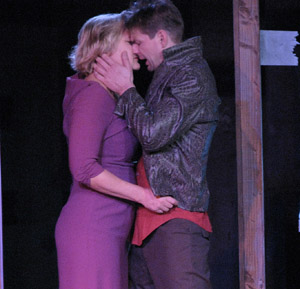 “Orpheus Descending” is the late Tennessee Williams’ modernized version of the Orpheus and Eurydice myth. In case you don’t remember, Orpheus used his musical powers to bring his beloved Eurydice back to life from Hades only to lose her by breaking the one condition – that he not look back at her until back on Earth.

Director Lou Pepe stays true to Williams’ version, which is set in the 1950’s American South and stars drifter Val Xavier (Gale Harold), who doesn’t exactly play the flute, but rather strums a guitar and wears a snakeskin jacket. Val’s Eurydice is Lady Torrance (Denise Crosby), a woman with a tragic past who longs for rebirth. He meets her while searching for work, and the opportunity to renounce his wild ways. Oh! Did I mention that during this time Val is being pursued by the lonely and vulnerable Carol Cutrere (Claudia Mason).

The play is like viewing highlights of the Harlem Globetrotters; each character, big or small, steals each scene with what they say or what it means when they say it (a trademark of Williams’ poetic writing). For instance, when Dolly Hamma (Kelly Ebsary) screams, which she does often, it sort of reminds you of how it’s supposed to be done. Another delight is Val’s somber musical numbers. The most powerful scene, however, is during the third act in which the lights die, flashlights beat on Val and a storm of hoots and hollers engulf the room as he is dragged away– the audience is a little stunned, very quiet and somewhat scared.

“Orpheus Descending” has a lot to say and like any great story it is of the “don’t tell me, show me” variety. Sometimes a message is summed up, like when Val prolifically describes a bird with no legs that sleeps on air; or the free-spirited Carol tells Val that she would love to hold something the way he holds his guitar; or Vee Talbot (Francesca Casale) repeats that she needs vision to see. There is much to ponder here.