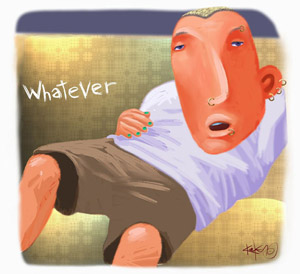 Mundane commitments you make to yourself are usually easy to break, like New Year’s resolutions, doing laundry and cleaning your room. Usually, if you can live with seeing the mess or sleeping in for just another day, it’s easier to just let laziness knock you out. Are these commitments usually completed? It depends if I ever get up.

What kills procrastination are deadlines and consequences. Change only happens after massive discontent, and if it’s costing you more time to waste time, then maybe it’s time TO DO SOMETHING WITH YOUR LIFE. So where am I going with all this self-reflection, and retrospect?

Well, a couple of things.

When the clock struck midnight New Year’s Eve, the happiness I experienced hugging and cheering everyone at the bar suddenly felt like a slow motion moment, as I appear to look over at my crush in passionate kissing position with someone else – his girlfriend.

It happens, but not out of sheer laziness or lack of effort. When you spend your whole life getting good grades, being a good girl and just trying to suck up to society’s huge ass, it seems that when you finally get a break, you take it.

The past six months have been times of needed self-reflection. I did not come out of college completely unscathed, a definite metamorphosis was taking place inside an academic institution of knowledge, community activism and sexual exploration. The way I viewed myself, my morals, dreams, sex and men came all too sudden. It was truly an enlightening experience because I was starting to form as an individual and understand where I would possibly contribute to the world.

However, this sense of enlightenment seemed to only exist and flourish in the world of college. Without that environment, it was hard to fully nurture this same sense of purpose and growth. Massive amounts of effort only to experience failure seemed to follow.

Within three months of leaving, I was able to find and secure a marketing job, to which I felt everything that I learned in college was a complete waste of time. The real world was strictly business in the way everything is supposed to act and run, and I wasn’t happy. That job probably sensed it too because I was let go. It was mutual: I had let go of the company (and marketing) long before they even noticed. The enlightenment from college seemed to slip away, and I fell into a perpetual couch potato, flipping Hulu channels and Facebook statuses to keep myself from actually accepting that my efforts at an actual career exploded in my face.

Reality is, I’m procrastinating and waiting for the ultimate deadline: poverty. A well-deserved reality at that if I take Benjamin Franklin’s word when he says: “Laziness travels so slowly that poverty soon overtakes him.”

Sooner or later, without a real full-time career, I won’t have the resources to sustain even a decent life where Ramen noodles is not a part of my diet. There’s health insurance, car payments, rent and snowboard trips I have to think of. Not to mention student loans, which I have already started paying.

So, am I extending the deadline for myself or simply not acknowledging it? In a state of procrastination, it seems easier to do both.