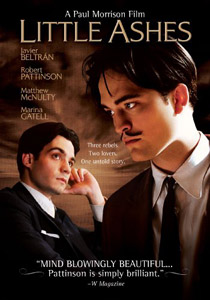 Robert Pattinson stars as a young Salvador Dali in Little Ashes. Dali arrives at Madrid’s School of Fine Arts where he becomes involved in the decadent lifestyle of Federico García Lorca and Luis Buñuel.

Joseph Fiennes and Brian Cox star in The Escapist, a vital prison escape tale that breathes new life into the genre.

Pontypool serves up a great twist on the zombie flick. A shock jock discovers his venomous words are spreading a virus, which turns people into babbling violent drones.

The fourth installment in the Final Destination franchise, entitled The Final Destination, features the same formula: a teen who saves his friends’ lives after receiving a vision, is stalked by Death. One by one his friends are picked off in hilarious ways (who doesn’t love to see snotty teens get their comeuppance?) as he tries to cheat the forces of cosmic balance. This latest incarnation also features a new twist: 3-D! David R. Ellis (Snakes on a Plane) directs.

“Parker Lewis Can’t Lose,” the beloved early ’90s high school comedy was like a small screen Ferris Bueller’s Day Off. The show follows the titular character, a wheeling-dealing lady’s man as he fast talks his way through high school, doing battle with the evil principal. Chock full of ’90s attitude, but with less cheese, it holds up a lot better than “Saved by the Bell.” The Complete Second Season is now available.

The final season of the British espionage drama “Callan” comes to DVD in Set 2. The influential series premiering in 1967 brought new grit to the genre. Star Edward Woodward won a BAFTA award for his portrayal of a Cold War assassin who attempts to give up the life.

One of comedy’s most famous duos star in Legends of Laughter: Abbott & Costello, a six-disc retrospective set. Included are two feature films, Africa Screams and Jack and the Beanstalk, 17 episodes of their radio show, 14 episodes of the “Colgate Comedy Hour,” which the duo hosted, a WWII PSA and a collection of trailers. Making appearances in the set are Errol Flynn, Veronica Lake, Lucille Ball and more.

People craving the absurdist humor of “Stella” and “Kids in the Hall” while looking for the crassness of “South Park” or “Family Guy,” search no further than The Whitest Kids U’know: The Complete Second Season. The hilarious sketch show features rap songs about getting high with dinosaurs and the disastrous consequences of voyeurism that would give Hamlet a run for its money. Season four is now showing on IFC.

Act of God is a poetic examination of the metaphysical effects of lightning strikes on people, from the director of Manufactured Landscapes. At the thematic heart of the documentary are questions of chance, fate and the human compulsion to attribute meaning to tragedy. The film features author Paul Auster, who witnessed a friend struck dead by lightning as a teenager. Also included is a short film by director Peter Greenaway.

“Top Gear” is a high octane BBC series following three "petrol heads" as they invent an endless array of crazy racing stunts, from attempting to drive across Vietnam in eight days to racing Japanese bullet trains to car fox hunting. (The Complete Season 11 and 12 are now available).

Frontrunner tells the story of the only female candidate, a fearless doctor and mother of three, running for president in Afghanistan’s first democratic election.

ALSO AVAILABLE: Dominick Dunne: After the Party – Collector’s Edition, Copyright Criminals: This is a Sampling Sport