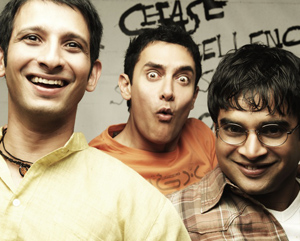 While Hollywood suffers through films like The Stupids and Dumb and Dumber, Bollywood is happily celebrating 3 Idiots. Starring some of the biggest names in Indian cinema – including Aamir Khan, Sharman Joshi, R. Madhavan and Kareena Kapoor – the highest-grossing Bollywood film ever is a quality story moviegoers will enjoy time and again.

A tale of three men who graduate from a top engineering school with not so stunning grades, 3 Idiots is quite the revealing tale of how our actions early in life can set the tone for how we live out the rest of our days on Earth. With comedic dialogue, memorable characters, an entertaining villain and the unlikeliest of heroes, director Rajkumar Hirani (and his co-writer Abhijat Joshi) strike a chord with audiences with 3 Idiots, based upon Chetan Bhagat’s page-turner Five Point Someone.

Set in the fictional Indian college campus of Imperial College of Engineering, the three “idiotic” characters represent very real segments of society, the comedic tales of each character is told in a way that allows the audience to laugh along; we find humor in the “misery” we share with the trio of misfits.

Representing the token smart kid from a poor neighborhood is Raju (Joshi), while Farhan (Madhavan) has an eye for capturing wildlife through his lens. Both are content with fulfilling their respective parents’ hopes and dreams – until they meet Rancho (Khan), a whiz kid and an “enlightened” soul who cynically believes there is no “perfect” career or “forced” happiness. With Kapoor playing Rancho’s love interest, the plot of 3 Idiots ultimately focuses on Rancho and his two college friends.

It is with Khan’s portrayal of Rancho where this film takes a more serious turn, allowing 3 Idiots to be a legitimate flick that does more than just poke fun at college life. In Rancho, the moral of the story is revealed through his commentaries on classism, arrogant professors and miserable lives induced by poor career choices, all while playing the ultimate jest à la Van Wilder.

An authentic story with entertaining songs, well-timed tidbits of knowledge to take home after the movie, gut-busting laughter and a cliffhanger of a climax at the film’s interval, 3 Idiots is a refreshing film.