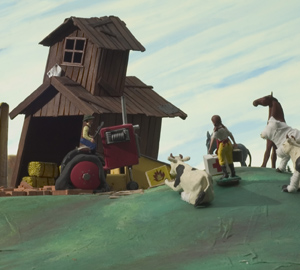 Filmmaking is getting progressively more and more innovative with each passing movie season. The art of telling a story is so much more complicated than flashing images across the screen and adding accompanying music to further the plot.

Nowadays, audiences who aren’t just buying the overpriced movie ticket to see their favorite actors readily welcome crazy, outlandish, different ideas. We want to be shocked by what’s put in front of us. We want to laugh and cry, but more than anything, we want to be left wondering how the hell someone could create such a piece of work.

A Town Called Panic is a valuable addition to the world of feature-length animation. It’s one of the rare full-length animated features to ever secure the coveted slot in the Official Selection at the Cannes, only the most prestigious film festival in the world.

Based on the cult series that was released by Aardman Studios of Wallace & Gromit fame, the quirky film follows the three friends who share a house in the countryside. As Horse’s birthday approaches, his friends are forced to come up with a last-minute gift.

Indian plans to build Horse a barbeque, which severely backfires when he accidentally orders 50 million bricks, setting off a bizarre chain of events. Their house is destroyed due to the excessive amount of bricks, and though they try to rebuild it, a mysterious cone-headed creature continues to steal their work.

They must travel to the center of the Earth, cross ice-bitten tundra and danger the underwater world of the pointy-headed thieves in an unusual stop-motion feature that doesn’t make a whole lot of sense. But then again, so what if it doesn’t?

Audiences of all ages can enjoy this film. I’ll admit, I was skeptical about the use of plastic toys as the characters, and the first few scenes may be an unusual experience. However, the sound and set design enhance the experience by tenfold. The little inanimate objects are brought to life and infused with charisma only the love of passionate creators can provide.

The medium of stop-motion animation is continuously being revamped, and this film attests to the imagination, which, despite the changing of everything else, never goes out of style.