Revenge On A Dime 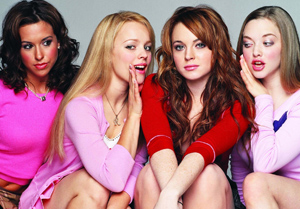 Watch Mean Girls for tips on how to get back at people.

Three years ago, I attended a press junket for a film starring hunky actor Josh Hartnett (Be jealous. Be VERY jealous). I took my seat at a big, round table in a suite at the Four Seasons Hotel in Beverly Hills. Before Hartnett entered the room, I, along with the other journalists, was instructed that we’d get 20 minutes with the director before speaking with the cast.

I’d seen his directorial debut back in high school and LOVED it, so it was a nice surprise to see that he was such a cool guy. He sat down in the chair between me and another writer – an older woman in her 50s. It didn’t take a rocket scientist to see that this lady sitting across the table had the hots for the director – BIG TIME. As she talked to him, she twirled the back part of her Bozo the Clown-colored mullet around her finger and batted her eyelashes at him like a cartoon character would. It was pretty funny to the rest of us.

Mid-sentence, the poor guy realized what was happening and soon diverted his attention to me. For the next minute or so, he flirted with me. It was nothing too serious. It was the kind of flirtation that guys would give to a friend’s girlfriend or to a hostess in a restaurant.

Also, I didn’t think much of it because I’ve been propositioned by a couple of actors and directors before, and it never fazed me much. I had a boyfriend at the time, so the last thing on my mind was hooking up with anyone other than him. But for some reason, that crazy old reporter lady somehow got it in her head that I was trying to come between her and her man.

For the rest of the press day, she made incredibly rude and off-color remarks. Not only that, but for every press junket I’ve done since then she’s been nasty to me. That’s right people, for three years, I’ve endured belligerent, patronizing and deeply offensive comments and behavior from this woman. She’s even taken a page from the movie Mean Girls by badmouthing me to other journalists, claiming that I (and not she) was flirting with the director, and that I need to “know my place.” Classy, right?

Now, if that lady was 30 years younger I might be inclined to break my foot off in her ass. But at the end of the day, she’s her and I’m me so I don’t sweat it. However, if you’re somebody who’s dealing with someone who is grossly rotten to the core, there are some fun and effective alternatives to turning the other cheek.

Got an opponent who is incredibly difficult to fight? Well, don’t stress out. You have the wisdom of the ages at your disposal. Purchase your own copy of The Art of War (amazon.com). This ancient tome was penned by Sun Tzu and has been the bible for every warring faction in the common era. This brilliant Chinese warrior’s advice for overcoming one’s enemy is still relevant to this day and wouldn’t you know it – it’s applicable for everything from a breakup with a cheating ex to a jealous frenemy with no concept of boundaries.

Unfortunately, if the stress of your situation has been weighing you down, nature has an excellent bandage for your ills. Valerian root (available over the counter at drug stores such as CVS and Walgreens) is an all-natural plant supplement that works wonders on anxiety. It can be administered either as a tea or taken in pill form. What’s even better is that unlike many prescription drugs, Valerian is cost effective (usually it’s no more than $9 for a month’s supply). Just be sure to consult your physician if you have any questions about it.

Finally, if you’re looking for serious inspiration that could only be thought up by the sickest paid minds this country has to offer, turn to Hollywood. Movies can be the best way to overcome an opponent. Films such as Oliver Stone’s Wall Street, the cult classic Revenge of the Nerds and even Mean Girls can offer some easy solutions to dealing with life’s little social messes. You can get them all through services like Netflix.

Fun for Less
Fun on a Budget: The Hollywood Way!
2,846 views

Fun for Less
Dollars and Scents: Fab Fragrances Under $20
3,856 views

Fun for Less
Getting Hitched For Mere Cents
2,146 views