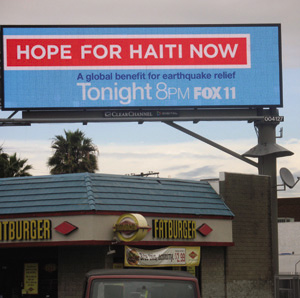 As day settles into night, there is a shining beacon of light that continues its presence throughout the cityscape. The newest proliferation of billboard advertisements as digital billboards have the capacity to be seen for miles away with a variety of advertising messages that quickly shift content like commercials on large LED television screens.

It seems appropriate in places like Times Square or the Vegas Strip, where residents and tourists have been accustomed to the flashing lights of giant moving advertisements. Travel past these cosmopolitan areas into local neighborhood streets, and the lights largely fade away.

Los Angeles is different. Digital billboards have become the newest city “transplant,” and for some, its spread from tourist centers to residential areas is unwelcome. Homeowners and communities from West Los Angeles to Silver Lake quickly cited an invasion of their neighborhood space, crying foul on the bargaining strategies between the Los Angeles City Council and billboard media companies to allow such visual bane to continue.

For the past several years, local homeowner associations and grassroots organization groups like Ban Billboard Blight (banbillboardblight.org) have publicly voiced their rage in local media outlets and city council hearings.

“It seems this industry won’t be content until every space in our city is filled with commercial messages,” writes BanBillboardBlight.org.

Even local artists are starting to voice their opinion on the growing controversy. This February, the MAK Center for Art and Architecture will be replacing several billboards across the city with conceptual artwork in a project entitled How Many Billboards? Art in Stead.

“We are aware of the politics which makes the exhibition more relevant. People are really thinking about billboards and who has the right to public visual space,” says exhibit organizer and MAK Center Director Kimberli Meyer.

Expect to see conceptual artwork located on major intersections in the city, designed as a way for the public to critically question the role of billboards. What is not part of the project are digital billboards.

“People have a really strong point in just not wanting these digital billboards blasting into their bedroom. I don’t think their message comes across in any more significant way in terms of artwork. The [regular] billboards sit there throughout the day, throughout the month, and become a landmark in a way,” says Meyer.

The evolution over the city’s growing discontent showcases a power struggle in which billboard companies have lured city council endorsements for a share of lucrative billboard revenue.

This is just a part of a long and winding story of litigation between the big guns of corporate and political interest at the expense of the everyday citizen, starting when a 2006 legal settlement allowed the “modernization” of 840 signs after Clear Channel Outdoor and CBS Outdoor sued the city over their current sign and permit fees. Since then about 100 billboards have been replaced to digital formats.

According to the Los Angeles Times, the deal was approved by the city council and constructed by former Los Angeles City Attorney Rocky Delgadillo. It was also noted by the Times that billboard companies spent $424,000 on billboard space that successfully promoted Delgadillo to city attorney in 2001.

The issue has gotten so out of control that as of December 2009, the Los Angeles Times has reported a ban on all new billboard modernization permits. This comes after Los Angeles Superior Court Judge Terry A. Green invalidated the 2006 agreement between the city, CBS Outdoors and Clear Channel.

LA Weekly has indicated the irony that this current outcome came as a result of a lawsuit filed by Summit Media, another billboard company claiming they weren’t given the same opportunity to digitize their billboards, and not from the public outcry of angry Angelenos.

Billboard companies have since appealed the ban with CBS President Leslie Moonves sending a personal letter to Mayor Antonio Villaraigosa, stating, “I truly believe this motion will be bad for the business community, for CBS and for the city of Los Angeles.”

Now the digital billboard controversy has received statewide attention as Assemblymember Mike Feuer (D-Los Angeles) is seeking a proposed two-year moratorium on new digital billboards to further research the health and traffic risk that 490,000 changing LED light bulbs can do to passing motorists.

The proposal is just another blow for billboard companies that claim digital billboards allow advertisers the ultimate flexibility. Messages can change throughout the day, with a rotation of images having at least 8-10 seconds of display. Advertisers can create their ad and have it up and running within 24 hours, saving money over time and printing costs.

Still, the future of whether the current digital signs will be taken down is up in the air. Many city council members are hearing the outcry of their constituents. But, money talks, and billboard companies seem to have a lot of it.