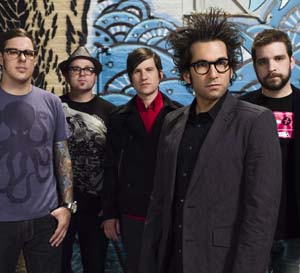 Ah, yes, Motion City Soundtrack. There will eternally be a soft spot in my heart for this motley band of amazingness.

When I was a junior in high school in fall of 2003, it was comforting to know that the future freaked them out, too, but by the time I graduated in 2005, everything was all right. And then again in 2007, I had a crisis trying to figure out where I belong and realized that it couldn’t be me. (If you got all of those references, you get a cookie and major props from me.) Now here we are in 2010, and the band that sings my life is back with another album, My Dinosaur Life.

Going back to their roots, the band recorded My Dinosaur Life in Los Angeles under the direction of Mark Hoppus, who also produced their second album, Commit This to Memory.

“It just kind of felt like we wanted to return to that sort of environment to record in,” says bassist Matt Taylor. “Because we had a lot of fun and it was very laid back. I don’t know it felt like going back home so to speak. It was a really good time. We had a really good couple of months making the album.”

And all the time spent on the album really paid off. It may sound like the whole process was fun and games, but the recording process wasn’t exactly a cakewalk.

“We definitely wanted the sound to just be really, really in your face, and I think that really came through especially with Justin [Pierre]’s vocals,” reveals Taylor. “He feels like on the last album, Even If It Kills Me, he wanted to go in and sing pretty and sing everything properly. This time he threw that out the window. He wanted for each song to get to the right place and convey a mood through his voice. And he sounds so good. I’m really proud of him on this album. There were songs where he went in and we knew he was going to have to blow his voice to get what we wanted – what he wanted really, and he did. And there were moments where I thought, oh man, this is going to be rough, but he got through the song, and the final mix is very raw and meaty sounding.”

But Pierre wasn’t the only one who had a trying recording process. Drummer Tony Thaxton suffered a broken arm from a fall in the streets of New York in early 2009, which delayed the album’s final release.

“That made things just a little difficult,” admits Taylor. “We kind of had to stall for a couple of months until he got back into working condition.”

But that wasn’t the only setback for the band. Even with Thaxton’s broken arm, Motion City Soundtrack still performed a smattering of shows and embarked on a certain high-profile tour that encountered some major road problems.

“We started the tour with Weezer, and then Rivers had the bus accident so the tour got cancelled,” says Taylor. But in the mean time, “We’ve been recording some songs for different projects, and we’ve been doing some promo stuff. We spent a day in New York doing a bunch of different photo shoots and different appearances and playing for different people.”

When Taylor says “different people,” he really does mean different. The band has worked hard since its inception to create their fan base.

“When we signed to Epitaph back in early 2003, our whole goal was to take it slow and not sign to a major right off the bat,” says Taylor. “We wanted to go indie to get in a van, be in that van for years and years and build a crowd pretty much just by touring, and that’s what we’ve done so it’s been very natural.”

And their method has paid off.

“We have really hardcore fans that wait in zero temperatures for hours on end,” Taylor marvels. “And some of them have seen us almost 100 times. We know of people who have seen us more than 100 times.”

But that’s not all. In Taylor’s experience, learning the ropes before going to a major label has also helped the band retain creative control over their art.

“If you spend all these years on the road as a band, making decisions and learning,” Taylor explains, “then people kind of respect that and allow you to have more freedom and trust you more. That’s kind of how I feel now that we’ve signed to Columbia. They know that we’re capable of being a band and they can kind of trust us and it’s a real healthy working relationship.”

But even though they’re part of a major label, don’t be shy about saying hi after a show.

“We’re not very hard to run into,” says Taylor encouragingly. “We usually like to come out and talk to people as we play.”