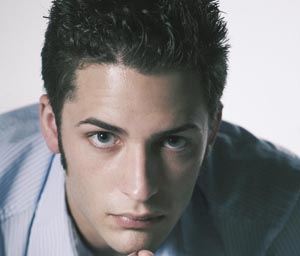 Listen to songs from Breaking when Brian Larsen performs at Room 5 Jan. 30.

Brian Larsen doesn’t consider his latest release, Breaking, a concept album. But there is a theme.

“The 13 songs are loosely strung together by the word ‘breaking,’ which appears in almost every song,” Larsen explains. “The word ‘breaking’ can mean so many different things and it took on so many connotations as I recorded the album, from breaking someone’s heart to breaking down boundaries or barriers.”

‘Breaking’ can also refer to breaking news, and here’s a bit of that for you: Larsen will be playing some of his new tunes during his set at the Room 5 Lounge on Jan. 30. Breaking is available now.

Grand Central Publishing has released Ozzy Osbourne’s autobiography, I Am Ozzy. The man who has to date sold over 100 million records with Black Sabbath and as a solo artist started out so poor that when he was a child his entire family slept in one room. The book delves into all the highs and lows of Ozzy’s career, including all the sex, drugs and booze that came along with the rock ’n’ roll lifestyle.

As Ozzy himself puts it, “A lot of it ain’t going to be pretty. I’ve done some bad things in my time. I’ve always been drawn to the dark side, me, but I ain’t the devil. I’m just John Osbourne: a working-class kid from Aston who quit his job in the factory and went looking for a good time.”

Osbourne will sign books for purchasers at Book Soup in West Hollywood Feb. 2 from 7 p.m. to 8:30 p.m. and then during the same hours at the Barnes & Noble on Edinger Avenue in Huntington Beach Feb 3. I Am Ozzy lists for $26.99.

Teddy Pendergrass, one of the most popular R&B singers of the late 1970s and early ’80s, has passed away at age 59. The one-time member of the classic vocal group Harold Melvin & the Blue Notes died eight months after going through colon cancer surgery and struggling with his recovery.

Pendergrass was no stranger to adversity; the singer was left paralyzed from the waist down after a 1982 auto accident. But after a six-month stay in the hospital, the man who many women thought of as a big sexy teddy bear returned to the scene with his Love Language album and additional recordings with Whitney Houston. Pendergrass died on Jan. 13 in suburban Philadelphia.

Indie recording artist Jay Reatard, whose most recent album for Matador Records, Watch Me Fall, was cited as being one of the best albums of 2009 by Spin Magazine, has died. Police were called to Reatard’s Memphis home in the early morning hours on Jan. 13, and as of press time there is some confusion as to any further details about the singer’s death.

Various online sources are saying that Memphis police are investigating the death as a possible homicide, while other reports fail to mention any indication that foul play is suspected. Reatard’s real name was Jimmy Lindsey, Jr.; he was 29 years old.

Pop singer Beth Thornley has had tremendous success in getting her music placed in movie and television projects; her delicate vocals have graced episodes of “The Hills,” “Friday Night Lights,” “Everwood” and “Scrubs,” plus films The Perfect Man, Between and Play the Game. That list will probably be getting a lot longer now that Thornley is ready to drop a new album called Wash U Clean.

“I like to write in a variety of styles,” says Thornley of the new material. “As a piano-based singer-songwriter, it’s very easy to fall into all-too familiar patterns, so I like to step into some different musical shoes for inspiration.”

She’s not kidding either about that variety; Wash U Clean begins with a blast of baritone sax, and it ends with a flurry of ukulele. Wash U Clean officially drops March 1, but Thornley will be treating her hometown fans to an early listen at a CD release show at the Hotel Café Feb. 6.