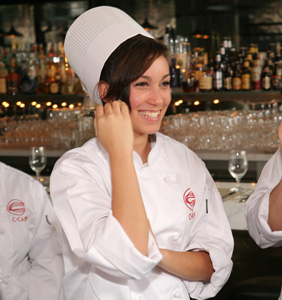 When school programs are being cut left and right, there is one bright beacon that will still be shining. The Careers through Culinary Arts Program, or C-CAP, has teamed up with one of the Southland’s most popular restaurant groups, the Chaya restaurants, to offer high school students seeking a culinary career the training and tools necessary to begin their journey. There are four Chaya properties in California: Venice, Downtown L.A., Beverly Hills and San Francisco.

Chaya Downtown’s Executive Chef Shigefumi Tachibe, who partnered with Mitzie Cutler, the Executive Director of C-CAP, started this series of contests to save C-CAP’s unique program. C-CAP works with public schools throughout the country, offering scholarships, cooking competitions, job training, internships and college and career guidance. Because C-CAP was in danger of being cut, Chef Tachibe and the Chaya Group adopted the schools to provide both financial and hands-on training. On their first meeting, Chef Tachibe served the students his famous Tuna Tartare and gave them a recipe challenge to create their own version.

Fifteen culinary hopefuls from Hollywood, West Adams and Westchester high schools went head to head in a “Top Tuna Tartare Chef” competition held at Chaya Downtown on Jan. 13. Elisa Mendoza, a senior from Hollywood High, came out the victor with her menu of fresh avocado, cilantro, red onion, key lime and jalapeño to add a kick to the freshly chopped tuna. Mendoza also received a chef’s knife, crucial to every chef’s repertoire, and her winning creation is being featured at Chaya Downtown (525 S. Flower St., Los Angeles) on the lunch and dinner menu through the end of the month.

For more information, visit ccapinc.org.
Article posted on 1/25/2010
This article has been viewed 3600 times.