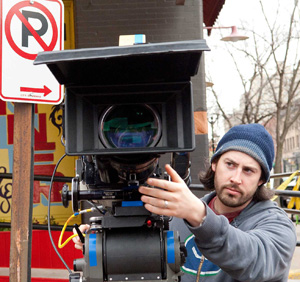 Jason Reitman will talk about Up in the Air.

Award season is in mid-bloom, and in case you haven’t been watching, there are always several films that are a cut above the rest in the eyes of voters. This year, the ones that you should see before they leave the theater are: Precious: Based on the Novel Push by Sapphire, Up in the Air, Nine and Crazy Heart.

You just had a mild heart attack. I know that no pre-Oscar list would be complete without our new blue, computer-generated friends.

James Cameron’s masterful work of special effects and technologically advanced production swept many of the categories at the Golden Globes and Critics’ Choice Awards. Avatar is not only one of the highest-grossing films ever, but it is a shoo-in for Oscar gold.

And all this talk about a film being a “masterpiece” or “ahead of its time” begs me to ask one of the oldest questions in the film geek’s bible: Who is responsible and to whom do we attribute the success of a film? Is it fair to allot so much praise onto one person when we know that it takes hundreds of people to put such a grand piece together?

My answer, however selfish, is that the director and writer are entirely responsible for the final product. Sure, the actors bring to life the characters and, to an extent, they can break a film. But the writing and the directing are what almost always make a film.

In the case of Avatar, James Cameron is god of the Na’vi and the millions of audience members who have fallen in love with the culture that came straight from Cameron’s imagination. He created the world, its people, the story and the way in which it was brought to life on the silver screen. In fact, he hired linguists to create a logical language and botanists to name the plants found on the fictional planet of Pandora.

That is an extreme example. But take Up in the Air, which is sure to take home a few awards come March. You’ve seen some of Jason Reitman’s prior work. I mean, you couldn’t have missed 2007’s Juno or Thank You for Smoking in 2005. His particular style is identifiable and completely his. He tends to love voice-over from the main character. Colors are very important to setting the mood in a Jason Reitman film.

Now that I have gotten that out of my system and now that you are falling in as much love with some directors as I am, there is a great opportunity to hear from the film artists firsthand.

But the best part (now that you love directors) is the part that is enticing you to partake in the series of panelists that include directors such as Cherien Dabis, Ruben Fleischer, James Gray and Michael Hoffman. The big names that especially caught my eye were Marc Webb, who did an amazing job with the sweet, independent, romantic comedy (500) Days of Summer and, drum roll, Jason Reitman who will talk about his Golden Globe winner film along with the film’s editor, Dana Glauberman, and cinematographer, Eric Steelberg.

The series is meant to give the everyday moviegoer the chance to hear from the people who put the images together. The relatively informal session goes in-depth as to the process of creating such a large-scale film, from conception to execution.

Go ahead and give all your loving to George Clooney. But keep in mind the people behind the camera are the ones who put Clooney in such great light.