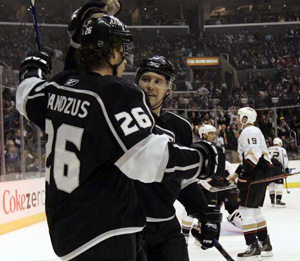 Look up in the sky! It’s a bird! It’s a plane! It’s a man wearing a Detroit Red Wings jersey hanging from the rafters!

OK, getting a bird’s-eye view of a live hockey game may be desirable for some people, but one unidentified man took it upon himself to find the most unique perspective in Joe Louis Arena by setting up shop on a conduit above a catwalk during the Red Wings’ contest with the Los Angeles Kings on Saturday.

So, who, exactly, was that man and how did he get up there, anyway?

The unidentified man was finally removed from roof-attached catwalk area high above the ice of Joe Louis Arena, but not before proving to be a sideshow during the second period of the game. Fans and players alike noticed the man, who was laying down flat on his front side while arena security tried to subdue him.

Perhaps the sideshow proved to be a fruitful distraction for the Kings, who scored three goals to overcome a two-goal deficit to win the game.

The Kings (29-19-3, 61 points) should be thanking the unidentified man for distracting Red Wing fans and players to help Los Angeles come away with the victory.

Maybe the Anaheim Ducks should be thanking the Kings, as hard as that may be to do. After all, the Kings’ victory over the Red Wings allowed the Ducks to be within stone’s throw of the playoffs.

Of course, the Ducks (24-21-7, 55 points) have done their part, winning eight of their last 10 games as the club ascends upwards through the standings, moving out of the Pacific Division cellar in the process. Most importantly, Anaheim trails both Detroit and Nashville (both with 58 points) by just three points for that final playoff spot.

If this keeps up, looks like both the Kings and the Ducks will be talking a walk into the playoffs come April.