Theories of Creation: A Conversation With Director Jon Amiel 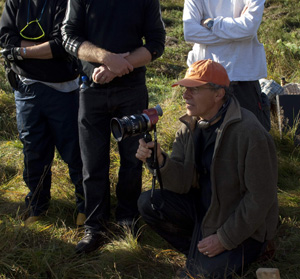 The making of Creation, a film about Charles Darwin, was as fortuitous and accidental an event as human evolution itself. Director Jon Amiel’s immediate response was “no” when asked if he could foresee a film based on the book Annie’s Box written by Darwin’s own great-great-grandson, Randal Keynes.

“There were many reasons I did not want to make this movie. What suddenly changed my mind was reading this book and discovering that this was not only a man who was intensely personable, warm and compassionate, but was also astonishingly persistent,” says Amiel.

The film depicts events in Darwin’s life before the publication of his landmark work On the Origin of Species, and attempts to elucidate the many factors – social, political and personal – that went into the writing of it.

Amiel explains: “I made this movie because I felt passionately interested in the man I discovered and was excited at the thought that if I never knew that this man existed behind that great edifice with the big beard, then I’m pretty sure that 99.9 percent of the rest of the world didn’t know him either.”

Like Darwin himself, Amiel was educated at Cambridge University. An English major and one-time director of a Shakespeare company, Amiel’s erudite influences are thinly concealed in his meditations on making a film on a historical figure.

“I loathe the term biopic and hate most biopics as such,” he says. “Chronology is rarely plot. The fact that somebody lead an interesting life doth not an interesting movie make.”

However, in Darwin’s case, it appears the details surrounding Darwin’s work were too intriguing for Amiel to resist.

“Here is a man who was never educated in biology, chemistry, genetics, and yet irrevocably and permanently changed all of these fields.”

Amiel is, of course, referring to Darwin’s theories on natural selection, ideas that Darwin mulled over for nearly 25 years before finally writing Origin. His reasons for delay included personal and public pressures, which the film explores as high drama. His theories remain controversial today, 150 years since the book’s publication.

“The fascinating paradox of Darwin was that he was a man who found himself in possession of one of the single most revolutionary ideas in human thought, yet he was by nature and habit and birth a social conservative,” Amiel says. “For this shy and private man to find himself in the glare of public spotlight was horrifying.”

What makes Creation stand out as a film of unique interest is the multiple factors it explores, including Darwin’s relationship with his family. He married his first cousin, Emma, who was a devout Anglican and disagreed with his theories. Together they had 10 children, three of whom died. The film attempts to draw a correlation between these private matters and Darwin’s work. In so doing, it enters into some dark territory. For director Amiel, the questions still hold mystery.

“What must it have been like [for Darwin] to view with complete dispassion the fragility of the young of all species and notice how they are the most frequently predated on … to suddenly pass that through the prism of losing a child and then imagining your own child falling out of the nest and decomposing in the earth. Yes, that’s some dark shit … to have lightened that side of the man’s pain and anguish would have been to do him a terrible injustice.”

The weight and gravity of representing Charles Darwin accurately was not lost on Amiel.

“When you make a film about Darwin, you’re entering such a gigantic field where people are jostling over themselves to show off their knowledge and express their opinions,” he says.

And yet it was important for Amiel that his film have humor and hopefulness. “I think people take from the film a kind of inspiration that comes from watching someone endure terrible hardship and pain and somehow emerge triumphant, which, after all, is the most inspiriting thing you can say about the human condition.”

Creation is currently in select theaters.
Article posted on 1/25/2010
This article has been viewed 1544 times.