A Bumpy Road: Lakers in Midst of Eight Away-Game Journey 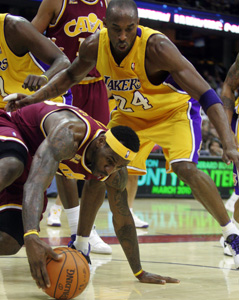 The 33-11 Lakers kicked off their longest road trip of the season on Jan. 21 in Cleveland (34-11), seeking revenge for their crushing Christmas Day loss to the Cavs. Although they were up 27-18 at the end of the first quarter, the Lakers were not able to keep up with the Cavs’ physical play. Cleveland swept this season’s matches against the Lakers with their 93-87 win.

All eyes were on Kobe Bryant and LeBron James, who finished with 31 and 37 points respectively, but supporting players really made the difference. Cleveland’s Shaquille O’Neal (13 points) and J.J. Hickson (11 points, 14 rebounds) were major contributors, while the Lakers’ Pau Gasol could have tied the game with 23.4 seconds left in the fourth, but he missed back-to-back free throws, despite normally being an 86 percent foul shooter.

Gasol, however, was able to redeem himself the next day in New York. The forward put up 20 points and eight boards in the 115-105 victory over the 17-26 Knicks. Laker Andrew Bynum also had a great game with 19 points and six rebounds.

Bynum, who was at the center of possible trade rumors with the Raptors a few weeks ago, missed the team’s charter flight from New York to Toronto on Saturday and had to take a commercial flight on his own to get to Toronto for Sunday’s game. The center scored 22 points against the 23-22 Raptors, while Bryant almost achieved his 17th career triple-double with 27 points, (a career-high) 16 rebounds and nine assists. Ultimately, Toronto came away with a106-105 win.