You I Love: (Picture This!) 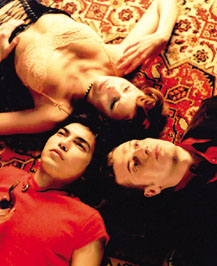 While the novel reader turns pages at his own pace, the museum visitor contemplates a Van Gogh to his heart’s content. The listener replays CDs endlessly, and the moviegoer remains a hostage to the pace and logic of the filmmaker’s whims. Sadly, as is the case in Olga Stolpovskaya and Dmitry Troitsky’s You I Love, some films drag their viewers around their celluloid universe like disobedient dogs wearing collars far too tight.

You I Love uncomfortably and inadvisably straddles the line between absurdity and realism, with a story that is inventive and lighthearted but utterly implausible and maddeningly paced.

Timofei (Evgeny Koryakovsky) is a Moscow advertisement executive who falls in love with Vera Kirillova (Lubov Tolkalina), a famous news anchorwoman with a food fetish. Scarcely after they meet and fall in love, Timofei, driving distractedly, almost runs over Uloomji (Damir Badmaev) who is a day-worker at the zoo, and they begin an uncontrollable and torrid affair. None of the lovers, however, will relinquish any passion, and the three form a decidedly unique love triangle.

Within this colorful palette, the performances are surprisingly uninspired and far too restrained for the far-fetched script. Koryakovsky’s rigidity saps the film of the vitality it so desperately needs to be considered alongside other quirky sexualized films like The Full Monty or the works of Pedro Almodovar. The actors never display sufficient motivations for their actions and are relegated to characterizations that consist solely of quick-snap reactions demanded by the story’s breakneck pace.

The film’s playful examination of homosexuality, meanwhile, is enjoyable but lacks true substance. Our world abounds with “Will and Grace”-esque gay comedies, but generates few frank depictions of homosexuality which are simultaneously humorous and genuinely thoughtful. You I Love never moves beyond its fantastical love triangle premise, and its conclusion lacks reason and believability. The only bright spot of the film is Alexandr Simonov’s cinematography, glowing with stunning visuals and crisp compositions.

It is truly disappointing when a film with so much possibility ends up accentuating its own limitations and highlighting its own failings rather than reveling in the accomplishments that should have been.