Scrumptious St. Louis: Gateway to the West (and Good Eats!) 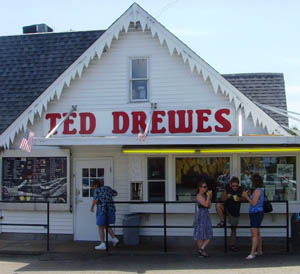 Finishing an ice cream cone before the dribbles soak your hand (and everything else in the near vicinity) can be a frustrating but enjoyable challenge. It probably wasn’t nearly as much fun to eat ice cream before 1904; that’s when the serving of the frozen treat in a cone was first popularized by food vendors at the St. Louis World’s Fair. No one knows exactly how many of the fair’s nearly 20 million visitors tried an ice cream cone for the first time that year, but one thing is for certain: For many, that initial taste was the beginning of a lifelong love affair.

Ask a dozen people in St. Louis where to get the city’s best pizza, and you’re likely to get 12 different answers. Ask President Obama the same question, and you’ll quickly get a resounding response: “Pi!” The president and his entourage feasted on several varieties of pizza from Pi Pizzeria (6144 Delmar Blvd.; restaurantpi.com) when they were campaigning in St. Louis last year, enjoying it so much that the Commander-in-Chief has since had Pi owner, Chris Sommers, come to the White House and prepare more of the pies.

Located in the hip entertainment district known as the Loop, Pi specializes in deep dish pizza with a crust made of cornmeal, and if you ask which one is the president’s favorite, you’ll have to choose between a vegetarian deep dish and a chicken-topped thin crust. Pi is also popular because they are extremely environmentally conscious, even to the point that their wine list is entirely “green.” Pi doesn’t take reservations (unless you’re, ahem, the Leader of the Free World…) so arrive here at 11 a.m. for lunch and just be prepared for a bit of a wait during dinner hours.

St. Louis is, of course, home to the iconic Gateway Arch, the symbolic gateway to the west that’s formally known as the Jefferson National Expansion Memorial (11 N. 4th St.). Taking a ride to the viewing area in the top of the arch is a must-do St. Louis experience and from the high vantage point you can see the city’s downtown area stretching out on one side and the mighty Mississippi River on the other.

Underneath the arch you can sample olden-day St. Louis by visiting Levee Mercantile. The shop is set up to resemble an 1870s-style general store and you can buy some of the same goodies here that patrons could back then; stick candies, pralines and fresh ground coffee are among the favored souvenirs, all of which will whet your appetite for a taste of modern-day St. Louis.

If lunchtime finds you craving good organic food, then a stop at the Local Harvest Café (3137 Morganford Rd.; localharvestcafe.com) is called for. True to its name, the eatery uses at least 50 percent locally grown ingredients in its menu items, and you can even pop next door to the Local Harvest Grocery and purchase ingredients for your own home cooking.

Meat lovers are well advised to head to Pappy’s Smokehouse (3106 Olive St.; pappyssmokehouse.com) where the food has repeatedly earned the restaurant the “Best BBQ in St. Louis” label. Be aware though, like Pi, Pappy’s is no secret – be prepared for a line out the door!

And you can’t really take a food tour of St. Louis without indulging in the gooey butter cake sold at Gooey Louie’s (6483 Chippewa; gooeylouiecake.com). The cake’s origin came about when a cook accidentally added too much butter to the recipe and inadvertently created a St. Louis tradition. Full-sized and mini-cakes are available in a dozen different flavors at the bakery’s outlet and they also have a shipping service so you can send a Gooey Louie or two back home.

Oh, and about that ice cream cone? Ted Drewes Frozen Custard (multiple locations) has the best ones, dribbles and all.