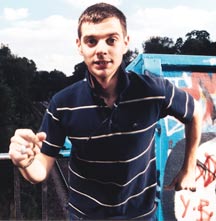 At first glance, The Streets’ Mike Skinner matches up to the Eminem comparisons: a quirky, in-your-face Caucasian rapper with a full arsenal of catchy beats and off-beat, witty lyrics…only this 23-year-old-Brit has about as much in common with Marshall Mathers as "Eastenders" does to "The Real World." The London-born/Birmingham-reared Skinner creates music that relies heavily on the popular sound of UK Garage (pronounced "garridge"), a two-step variant of hip-hop and R&B strongly influenced by house and drum’n’bass, which has been popularized (and homogenized) by yet another UK export, Craig David. But instead of David’s over-produced crooning, Skinner points his observant eye toward an otherwise musically ignored section of life ——modern day English suburbs. From KFC and Playstation to the youthful discovery of drugs and clubbing, this is a crystal-clear picture of what post-millennial culture has become for the majority of Britain’s youth. Differing colloquialisms aside, Skinner’s music has an almost universal appeal.

First introduced to hip-hop via his older brother’s collection of De La Soul and Beastie Boys records, Skinner was "fiddling" with keyboards, composing tunes, and collaborating with friends by his early teens, even taking a stab at playing guitar in a Rage Against The Machine-inspired rock band. It was at fifteen that Skinner tried his luck at starting his own record label, though without getting very far, as he explains: "The bottom line is manufacturing a record and getting it in shops…and when you don’t have any money, you can’t manufacture records. I kinda didn’t get past the first hurdle." Nevertheless, he persevered and formed a group of live emcees that played in various Birmingham dance clubs, as well as a hip-hop group that he’d inevitably spin off from to start The Streets (Skinner is currently ensnared in a legal battle with one of the members). But when his efforts were met with little interest from the few record labels they approached, Skinner felt compelled to disappear in Australia for a year, doing the necessary coming-of-age "clearing of the head with a backpack in tow."

With enough wild oats sown on foreign soil, Skinner returned with a solid vision of his music and how he wanted it to be heard. He sent a demo to premier Garage label Locked On, who liked what they heard, and in 2002 the home-recorded and self-produced Original Pirate Material was released (Vice’s fledgling label picked it up for U.S. distribution later in the year). In addition to the endless acclaim from fans and critics, it also received a nomination for the highly regarded Mercury Prize. He is currently on tour in the States to promote the album.

Being that Skinner offered his debut album as an MP3 online before it hit record stores, his attitude toward file-sharing is unsurprisingly lackadaisical. "I think the problem that big business has with MP3s is that in some ways, they’ve lost the absolute iron grip control that they’ve got of everything. MP3s might harm mediocre music because there’s a lot of kids that listen to music before they buy it, so record labels won’t be able to get away with releasing it. But the good stuff rises up and they buy the CD, because they wanted the packaging and the photo of the bloke that made it and the CD itself. I mean, I had the Snoop Doggy Dog album on tape for a year and then it died, so I bought it. I would’ve bought it anyway, ‘cause I liked the album and I wanted to own it, but I probably wouldn’t if I hadn’t had the tape first." Well, he must be onto something, as it’s The Streets, and not Metallica, that’s flying off the shelves.