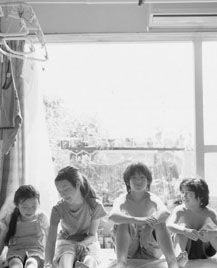 Nobody Knows begins in the summertime with a young boy named Akira, who appears to have not bathed in days, gently caressing a pink suitcase while riding the subway. He wears a blank expression and seems to be making mental contact with his young female companion. Before we know what’s going on, the scene ends and the film goes back three seasons to autumn – and for the next two hours, we see a brilliant drama unfold. This is the work of director Hirokazu Kore-eda (Distance) who, in his fifth film, uses a docudrama style similar to that of French New Wave to explain how Akira arrives at that moment on the subway.

When the autumn season begins, we see a clean-cut Akira (newcomer Yagira Yuya) arrive with his mother, Keiko (Japanese pop star You), at their new apartment building. The landlord and his wife rent the two a flat because Akira is old enough to not annoy the neighbors. Mother and son carry their belongings to their second-story room, where suitcases open and three more of Keiko’s children are revealed.

Kyoko, Shigeru and Yuki arrive in secret and are told to never leave the building or else the whole family will be evicted. Keeping this in mind, the four youngsters (who all have different fathers) never attend school or go out to play. In essence, they are denied their childhood. One day the irresponsible Keiko leaves the four children, promising to return sometime in the future. This leaves Akira, who has yet to reach his teens, with the responsibility of being a parent to his three younger siblings. From this point on, we witness the four children survive as best they can in an adult world while still trying to maintain a childhood.

Despite the hardships the four endure, Kore-eda brilliantly displays the positives of the situation as the siblings become closer to one another, knowing well enough that if their secret is revealed to the outside world they may be permanently separated. As a harp gently plays throughout the film’s score, we are constantly reminded that the subject matter of this Japanese docudrama (which is based on a true story) is about four children left to fend for themselves. Perhaps the sound of that gentle instrument is a metaphor for the slow stripping away of the children’s innocence.