What Made Milwaukee Famous?: Harley-Davidson 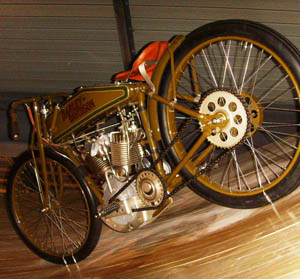 Piano pounder Jerry Lee Lewis once had a big hit with a song called “What Made Milwaukee Famous,” a beery ode to a city famous at the time for being the home of big breweries like Miller, Pabst, Blatz and Schlitz. And while Milwaukee is still very proud of its well-deserved reputation as America’s beer capital, there are many other things that the city is known for, including its attention-grabbing calling card that’s been heard in every single corner of the world: the distinct rumble of the Harley-Davidson motorcycle!

It was in 1903 that William S. Harley and Arthur Davidson, both in their early 20s, first made Harley-Davidson motorcycles available for sale to the public. Back then the men had nothing more than a small shed to use as their workshop, and it’s amazing to think that one of the first things you see when you visit Milwaukee’s Harley-Davidson Museum (400 W Canal St.; harley-davidson.com) was created in that tiny building; the oldest known Harley in existence, “Serial Number One.” The cycle looks like little more than a motorized bicycle, but it was the beginning of a great success story that comes to life as you navigate the multiple floors of the museum where hundreds of Harleys of every vintage are on display, including dozens of one-of-a-kinds like Evel Knievel’s Wembley jump bike and the 13 1/2-foot long “King Kong.”

The museum’s Engine Room is full of interactive exhibits that show how the powerful Harley engines work as well as an “exploded” view of a Knucklehead that has been dismantled. Other rooms feature everything Harley, including a room full of posters, a wall lined with gas tanks featuring custom art and even a room full of Harleys that you can hop onto for a photo opportunity. The actual Harley-Davidson factory is at a separate location but the museum has information on factory tours.

Other museums that are fun to visit include the Milwaukee Art Museum (700 Art Museum Drive; mam.org), where the building itself is a piece of art that features the Burke Brise Soleil, a wing-like sunscreen that can be raised or lowered creating a unique moving sculpture. You can’t miss the museum silhouetted against Lake Michigan – the movable wingspread is as wide as a Boeing 747!

Then there’s Discovery World (500 North Harbor Drive, discoveryworld.org), also located along side the lake, with its hands-on exhibits in which you do things like operate a robot in the Techno Jungle area or create your own DVD in their fully-rigged television studio. Discovery World is also home to the Virtual Les Paul, an extensive exhibit dedicated to Wisconsin native Les Paul. The display overflows with memorabilia from the late guitarist and inventor and includes dozens of guitars, many autographed by some of the world’s greatest rock guitarists.

If your visit to Milwaukee is timed for late June or early July, you’ll find that the whole city is enthralled with another noise it makes that equals the thunder of a Harley – the annual music festival known as Summerfest (summerfest.com)! Billed as the world’s largest music festival, Summerfest keeps Milwaukee rockin’ for a full 11 days as more than 700 bands take the stage at the Marcus Amphitheater and 10 additional stages. The Summerfest grounds are huge and feature all the food and fun of a state fair along with music for all tastes. And speaking of tastes, you can’t leave Milwaukee without trying a local favorite; fried cheese curds! You’ll find the tasty morsels at Summerfest and at dozens of eateries throughout the city.

And yes, Milwaukee still makes beer. Take the tour at Lakefront Brewery (1872 North Commerce St.; lakefrontbrewery.com) and you can sample some of the best.