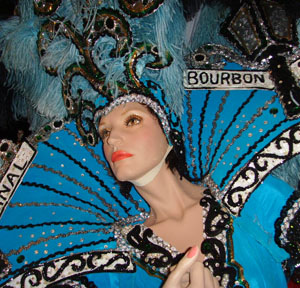 Peek in to the Mardi Gras Museum of Imperial Calcasieu.
(Credit: Kevin Wierzbicki)

Gumbeaux Gator is probably the most popular critter in all of Southwest Louisiana. There’s good reason, too, for the overstuffed mascot of the Lake Charles area to be cherished: He loves to party! It might be that big ol’ snout of his that allows him to sniff out the action, but if there’s fun involved, Gumbeaux will be there. And it’s hard to find a place that’s more fun than Lake Charles at Mardi Gras.

Of course, Gumbeaux Gator is just a person in a costume who represents the freewheeling part of Lake Charles at events all over the city all year round. But come every February, the rest of the city is preoccupied with costumes too, as Fat Tuesday, better known as Mardi Gras, nears.

The history of Mardi Gras goes all the way back to the days of ancient Rome to a time when the city first embraced Christianity and held a carnival-like party influenced by both Christian ideals and Pagan beliefs. Mardi Gras made its way to Louisiana about 300 years ago and even though the celebration has evolved, one thing hasn’t changed – Mardi Gras is still the time to let your hair down and indulge in frivolous fun.

Lake Charles has one of the country’s biggest Mardi Gras celebrations that culminates with hundreds of garishly-decorated floats making their way down Ryan Street as the Krewe of Krewes’ Parade rolls. Some of the massive floats are as long as a semi-truck and just as noisy as each float blares music that goes along with its theme, while the costumed revelers aboard toss beads and other trinkets to the crowd lining both sides of the street. Bead catching is a big part of the fun; the plastic necklaces are not of any monetary value, but the idea is to catch and collect as many of the strands as possible.

To better show off the glittering floats, the parade is held at sundown, but Lake Charles also has a smaller affair, the Red Hat Parade that rolls on Mardi Gras morning. Street parties spring up all over the city throughout the day and at these you’ll always find a Cajun band playing and plenty of Cajun food and other Southern delights waiting to be consumed.

If you visit Lake Charles during Mardi Gras, the best way to see Krewe members in their ornate costumes is to attend the Royal Gala at the Lake Charles Civic Center (900 Lakeshore Drive; cityoflakecharles.com) the night before Mardi Gras. This event is where the Krewes really show off their creativity as Krewe kings, queens, royal dukes and duchesses promenade through the hall in their outrageous feather-adorned finery.

You can still enjoy lots of costumes if you come to Lake Charles at any other time of year though; the Mardi Gras Museum of Imperial Calcasieu (809 Kirby St.) has an extensive collection of outfits worn in past years in local celebrations as well as from the festivities in New Orleans and beyond. The museum has a great display of country-style Mardi Gras costumes too; these outfits go without the feathering, but they’re just as outlandish and usually feature a conical hat of some sort.

And remember if you run into Gumbeaux Gator, you’re in the right place! Hint: He really likes to chow down on the crawfish platter at Steamboat Bill’s (1004 N. Lakeshore Drive; steamboatbills.com) and then head to Delicious Donuts and Bakery (2283 Country Club Rd.; deliciouskingcakes.com) for a big slice of king cake, the traditional Mardi Gras pastry. A gator’s got to eat, you know!