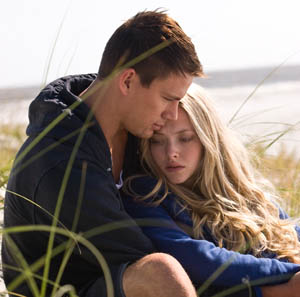 “What does it mean to truly love another?”

That’s the question Nicholas Sparks – and his wily, tear-jerking ways – asks in Dear John, the most recent film adaptation from the author to arrive on the big screen. The movie, which tells the story of John Tyree (Channing Tatum), a Special Forces soldier, who falls in love with Savannah Curtis (Amanda Seyfried) while on leave at home in North Carolina, is about “first love, that one you cannot get right no matter how hard you try,” Tatum, sporting a goatee and a luxurious black cashmere sweater, says after settling into a table at the Four Seasons in Beverly Hills.

The actor, who deftly exposes a masculine yet tender and vulnerable John Tyree, has been attached to the project since it began development four years ago, long before the studio had a script, a director or a co-star. He says it was the imperfection of the love story that first attracted him to the material.

“You’re supposed to not do things right,” Tatum smiles. “That’s what I loved about reading the book, and that’s what I love about the movie. It’s not a fantastical box of a movie with a bow on top. It’s real. It has more edge and darkness to it than some of [Sparks’] novels in the past.”

Adding to the realism was the inclusion of Oscar-nominated director Lasse Hallström (What’s Eating Gilbert Grape, The Cider House Rules, My Life as a Dog), a man who Tatum describes as having “a sort of allergic reaction to anything that’s cheesy.” It’s an interesting affliction for the man who helmed a catalogue of ABBA videos during their prime years (circa 1974-1982), including classics “Dancing Queen” and “Super Trouper.” Filled with soft focus, smoke machine haze, star filters and silver leisure suits, those videos made frequent appearances on the Dear John set.

“He’ll show you on his iPod,” Tatum laughs. “He’ll be like, ‘Hey guys, would you like to see my earlier work?’”

Having gotten any cheesiness out of his system with his early music videos – a time the director calls “film school” – Hallström was very concerned about how to walk the line between drama and romantic melodrama without making it seem forced.

“My number one challenge was to stay on the right side of that line,” Hallström explains in a soft Swedish accent. “I am very drawn to strong sentiment, but I think I have an allergy to sentimentality. The difference, I think, is in the performances. I tried to stay real and honest with the performances and make it as authentic as possible. That’s the trick. Anytime you do a false move, something pushed, stylized or affected, you’re dead.”

Hallström was unfamiliar with Tatum’s work when he was approached to direct. Before signing onto the project, he wanted to make sure he would be able to work with an actor he hadn’t expressly chosen for the role.

“I watched his movies, and he was very real. I met him and just thought he was the best choice. He’s a really great actor. He’s so sweet and charming and gregarious and generous,” the director enthuses.

Some of the best young talent in Hollywood auditioned for the female lead, but Seyfried brought a quirkiness to the part unlike any other.

“We auditioned lots of ladies, and she was the choice,” Hallström says. “She was unpredictable.”

“I got to read with all the girls,” Tatum recalls. “It’s very interesting to see these different Savannahs, and then one walks through the door and you’re like, ‘Ooooh. Right.’ It’s one of those ah-ha moments. [Amanda’s] fantastic. She’s hilarious and really weird at times, which kind of makes it great. She makes really interesting choices, goes away from the obvious all the time. She’s got the voice of an angel, and she’s beautiful. She’s the perfect package.”

Seyfried lights up at the mention of her leading man and is eager to return the compliment when she hears the praise heaped on her by Tatum.

“When I first met [Channing], I was like ‘Oh, shoot, am I gonna fall in love with him?’” the actress beams. “He’s so cute and so funny and really honest. He’s the perfect co-star. We both really respected each other, and we had the same mentality on set. When you have an actor that just jumps in it with you, it’s pretty cool.”