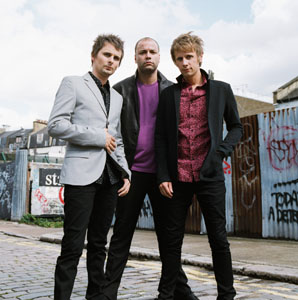 The roster for the 11th Coachella Valley Music & Arts Festival has been announced. The festival opens April 16 with headliner Jay-Z and a list of supporting acts that includes LCD Soundsystem, Them Crooked Vultures, Vampire Weekend, Deadmau5, Public Image Limited, the Specials, Grace Jones and She & Him.

Muse will have the headlining spot April 17 when Faith No More, Tiesto, MGMT, the Dead Weather, Devo, Coheed and Cambria, Shooter Jennings and Tokyo Police Club will also appear. Gorillaz close out the festival on April 18 along with Pavement, Thom Yorke, Spoon, Sly and the Family Stone, Gil Scott-Heron, Deerhunter, Gary Numan and Julian Casablancas.

All in all, over 130 acts will perform this year at the Empire Polo Club in Indio. Details on tickets, travel and camping packages and the ever-expanding lineup can be found at coachella.com.

Billy Corgan, leader of the Smashing Pumpkins, has decided to give away the music comprising the band’s latest effort, Teargarden by Kaleidyscope. Fans will be able to download all 44 of the album’s tracks absolutely for free, but there is one catch; they’ll have to do it one song at a time.

That’s mostly due to the fact that Corgan and company are still recording and have no set time to finish the project. So far two songs have been released; “A Song for a Son” and “Widow Wake My Mind” are now available at smashingpumpkins.com.

Corgan explains that Teargarden by Kaleidyscope is based on ‘The Fool’s Journey’ as signified by the progress of the Tarot: “The intention is to approach the work by breaking down the journey of life into four phases as made by different characters depicted in major arcane cards: the Child, the Fool, the Skeptic and the Mystic.”

The band also plans to release the music as a series of four-song EPs.

Dixie Dave, the vocalist and bass player for sludge metal act Weedeater, has lost a toe in a firearms accident.

The singer has managed to keep a sense of humor even though he’s now short a digit, issuing a statement that says, “It wasn’t my intention to shoot off my big toe! Here in the Weedeater camp we pride ourselves on a long tradition of shooting our band in the proverbial foot right before we’re supposed to do something important. This time we really did shoot ourselves in the foot; I shot my big toe off while cleaning my favorite shotgun.”

The band has had to postpone the recording of their next effort for Southern Lord Records, but as soon as Dixie Dave recovers, they plan to hit the road for their Nine Toe Tour.

Folk singer Kate McGarrigle has died. McGarrigle suffered for several years with a form of cancer called sarcoma, but remained energetic enough to perform recently at the Royal Albert Hall in London.

McGarrigle had a long career that included 10 albums cut with her sister Anna; she was also the mother of singers Rufus Wainwright and Martha Wainwright. McGarrigle died at 63 in her Montreal home on Jan. 18.

It’s no secret that the members of STS9 are activists; they’ve rallied fans to donate a quarter of a million dollars to causes like Rock Against Cancer and the Yellow Ribbon Fund, and they’ve helped build houses in the Lower Ninth Ward in hurricane-ravaged New Orleans.

Now they’ve turned their attention to helping with the tragedy in Haiti, asking their fans to give whatever they can to the Red Cross or other relief organizations working in the earthquake’s aftermath. The band has put up a list of reputable charities at STS9.com; information will also be available at the band’s show at the Wiltern on Feb. 12.

Former Cocteau Twin member Elizabeth Fraser has released a new EP called Moses that’s available as a download or on vinyl. Fraser is donating all proceeds from the release to the family of Jake Drake-Brockman, her friend and former member of Echo and the Bunnymen who died in a motorcycle accident last year.