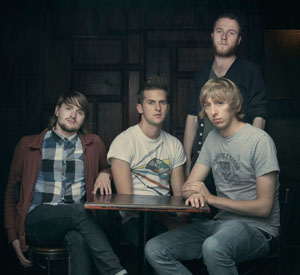 Purveyors of the peculiar, Wild Beasts have already shaken up the UK indie scene with their sophomore effort, Two Dancers. They now stand poised to take on U.S. audiences for the first time.

Recorded in the countryside of Norwich, Norfolk, the release blends surreal, somniloquy-style lyrics with atmospheric sonic landscapes. This release sees a departure from their vaudeville-flavored debut, Limbo, Panto, displaying a marked evolution of their craft. While Limbo, Panto was a frantic wake-up call, a hammer to the placid waters, Two Dancers is a lullaby beckoning to a Dali-esque dream world, distant ripples spread out over the waves.

“We sort of made a loose agreement that this album would be more ‘adult,’ whatever that meant. And as it turns out, I’m not sure if we knew what we meant by that, as I rather think this album is more concise, brief even, which is what we’d always aimed at since day one.

Two Dancers is a more cohesive whole than its predecessor, thematically more streamlined and fluid.

“[The songwriting process] was quicker and each song tended to have elements of the next song about it. So structurally, sonically, lyrically, the songs are all tied to each other. They are brothers and sisters. The first album had more pains taken over it. We tried to make a definitive statement, whereas this is calmer, there are fewer ideas on it and the ideas are made to do more heavy lifting as a result I think,” Fleming explains.

“There was a definite lyrical to-and-fro between Hayden and I as well, though we wrote separately, we were aware of what the other was doing (I lived downstairs from him at the time),” he continues. “We recorded almost everything and ripped things apart and stitched them back together again. Most songs had a few alternate versions, and I have a couple of demos that contain the bulk of the album’s themes in about 10 minutes of music. I think we learned how small ideas are, and that writing is nothing but a series of choices.”

The centerpiece of the Wild Beasts’ sound is certainly its unique vocal mix. Counter-tenor Hayden Thorpe spars delightfully against Fleming’s baritone, providing contrast to a band already rife with contradiction, as their first single, “Hooting and Howling,” expertly puts it, “equally elegant and ugly.”

Where Thorpe’s strong falsetto can often prove as startling as a caterwaul, Flamming’s is full-tone honey-thick and comforting.

“On this album at least, we were playing with the idea of it being two voices, or at least two sorts of voices that were talking; always a point of view, never a statement of fact,” says Fleming.

England, formerly lauded for its output of eccentric artists, seems to have dropped the ball in recent years to us rivals across the pond. With a sound harkening back to art-rock staples the likes of Kate Bush, Peter Hammill and even Roxy Music, it seems that perhaps Wild Beasts have picked up the freak flag where their contemporaries have dropped it.

“I do kind of feel like the word eccentric is used to make something strange seem harmless and remove its threat. We want to be as much ourselves as we can be, and sometimes in order to shrug off the fetters it means trying to look at things with new eyes, and this can be sometimes clumsy or inelegant,” explains Fleming. “I suppose we do get whimsical, and sometimes we’re even a bit frivolous, but any eccentricity really isn’t a mannerism, it’s a temperament. And I guess we’re part of a tradition to an extent, but not one that is necessarily exclusively British, and we don’t try to play it up, we just seem to end up there naturally.”

The band, whose members have known each other since childhood, hails from Kendal, a small town of about 30,000 that is rainy and “conservative, but surprisingly art-friendly,” as Fleming puts it.

A typically snarky UK music press has showered them with accolades and the response in the U.S. has proved equally favorable.

“[The response has been] astonishing, really quite touching. Growing up, London seemed very far away, let alone the U.S.A., so to go there and to be welcomed, listened to and understood is something quite amazing. It seemed like there was a cushion for us to land on and that we didn’t have to explain what we were doing or justify ourselves. It felt like we’d made a cool friend,” Fleming says.

Wild Beasts will perform Feb. 10 at the Troubadour. For more information, visit wild-beasts.co.uk.