Priestess: Prior to the Fire 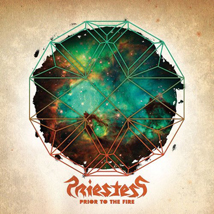 Thurston Moore said it well years ago, and I paraphrase, that guitar-based rock is far from over. Synthesizers or techno or anything else non-rock has not killed it; it still has its own evolution to experience. Priestess have stepped up to not only prove that right, but to also up the ante and make the case that heavy metal has saved rock ’n’ roll’s sorry hide.

The funny thing is that Priestess’ frontman and extraordinary voice Mike Heppner eschews the “metal” label. Priestess is hard rock – nothing more, nothing less. This is true, but as the band shows on Prior to the Fire, they have songwriting skills and musical talents that could only be honed by years of woodshedding and gig-after-gig-after-gig.

If the opener “Lady Killer” doesn’t knock you out with its pummeling riffs, perpetual-motion rhythm and sense of melodic phrasing beyond what any metal band in recent memory could achieve, then the utterly catchy tour-de-force “Murphy’s Law” sneaks up on you and demands that you listen to it at least four or five times a day. Priestess gives you rock with raw physicality, emotion and artistry all rolled into one headbanging package. Highly, highly recommended.


Prior to the Fire is currently available.
Article posted on 2/3/2010
This article has been viewed 1379 times.