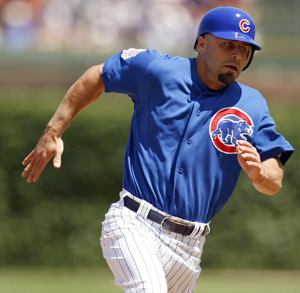 Another winter is passing by. Yet again, the Dodgers’ front office staff opted to spend it in hibernation.

As they awaken from their slumber in these final few weeks before spring training, the Dodgers suddenly have a pen and paper in hand, willing to hand both items to a free agent willing to spend the next summer playing in front of the sun-splashed rolling hills of Chavez Ravine.

Fresh off signing a few key players to contract extensions, the Dodgers finally decided to test the free agent market – even after some marquee names are no longer available. Sure, the Dodgers missed out on filling out their rotation with Joel Pineiro or adding a solid bat in the recent World Series MVP Hideki Matsui. And the Blue Crew expressed no love lost in letting players like Randy Wolf, Orlando Hudson, Juan Pierre, Jon Garland and Jim Thome (among others) depart from Chavez Ravine without much fanfare.

Yet, General Manager Ned Colletti revealed his ace-in-the-hole by bringing Reed Johnson into the fold.

Oh, alright, with the Los Angeles Times reporting on Monday a deal was imminent but not final, Johnson is not officially a Dodger yet. Still, who could go wrong with Reed?

Despite missing close to two months last season – thanks to a broken foot – Reed hit .255 while smashing a whopping four home runs and collecting 22 RBIs. Even more, the 33-year-old outfielder is a career .282 hitter. Hold on to your hats and buckle up as Reed prepares to take Los Doyers for a ride in 2010.

OK, all joking aside, the potential deal actually makes some financial and practical sense. After all, the Dodgers lost an everyday dependable bench player when they traded Pierre to the White Sox. With no one around to fill Pierre’s void, Johnson seems good enough to be that proverbial fourth outfielder. If Johnson accepts the reported one-year, $800,000 deal, Colletti would have actually made a great deal.

In 2006, Pierre signed a five-year, $44 million contract with the Dodgers. With this season being the last of that deal, the Dodgers would owe Pierre $12.75 million for the 2010 season, a figure far too high for someone who is effectively a part-time player.

While Pierre was solid in filling in during long stretches of the 2009 season – mostly due to Manny Ramirez’s 50-game suspension – his $10 million did not seem justified despite a .308 average and 30 stolen bases in 145 games. Even more difficult to justify is Pierre’s $2.75 million raise for 2010, especially when Andre Ethier, Matt Kemp and Manny Ramirez are full-time mainstays in the outfield.

Meanwhile, the Dodgers’ reported one-year, $800,000 offer to Johnson makes perfect sense. Should the deal go through, Colletti effectively saved the Dodgers close to $12 million in asking Johnson to do in 2010 what Pierre did in 2009: fill-in for the outfielders whenever they need a dry spell.

Not discounting what Pierre did for the Dodgers last season, but it is a deal like this one (including the potential signing of Johnson) that gives Blue Crew fans some hope that Colletti is doing the right things to bring in pieces to make a World Series run in 2010, even though he did not jump on some of the biggest free agents at last month’s Winter Meetings.

To be sure, the potential Johnson signing will not be the last move Colletti makes before spring training kicks off in a few weeks – especially with an estimated 100 free agents still searching for a new team to call home. Perhaps a reunion with Pedro Martínez or the addition of Chien-Ming Wang could be in the works to help bolster the Dodgers’ rotation. Other notable available pitchers include John Smoltz, Erik Bedard, Noah Lowry and Liván Hernández, who can be of great value to Colletti.

At the end of the day, with a moderately strong free agent market still in play, there are still plenty of players available today who can come in and help the Blue Crew move beyond the NLCS and into the World Series come October 2010.

The only question is how loud will Colletti’s roar be as he fully awakens from his winter hibernation – and whether that roar will be enough to scare off the rest of the competition so the Blue Crew can end its now 22-year championship drought.