Trading for a Streak 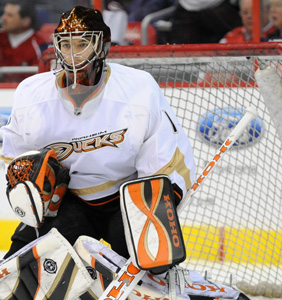 Oh, what the Anaheim Ducks would do to trade places with the Los Angeles Kings. Instead, the Ducks traded away a former Stanley Cup most valuable player.

To no one’s surprise, the Ducks reportedly sent Jean-Sébastien Giguère, 32, to the Toronto Maple Leafs on Sunday in exchange for goalie Vesa Toskala and forward Jason Blake – one day after his competition, Jonas Hiller, watched the ink dry on a four-year, $18 million extension.

With a weak performance as backup goalie (4-8-5 record, 3.14 GAA, 90 percent saves) and a stated desire to be a regular starter, the only choice the Ducks had was to trade Giguère away, despite his two Stanley Cups with Anaheim and his 2003 most valuable player trophy.

Along the way, Giguère amassed 208 of his 214 wins as a Duck. Yet, with only four of those wins coming this season and the Ducks currently out of the playoff race, change was imminent. It also did not help to have Hiller sport a 21-15-2 record with a 2.75 GAA and 91.6 save percentage. Simply put, the numbers did not add up for Giguère to continue playing in Anaheim.

Whether Anaheim (25-23-7, 57 points) makes a playoff run in light of this trade remains to be seen, but the Ducks are certainly envious of the Kings’ current success.

Too bad the NHL will be on hiatus for 20 days due to the impending Winter Olympics. With just six games on the team’s February schedule, the Kings hope they are not trading a late-season push for a well-deserved mid-season break.