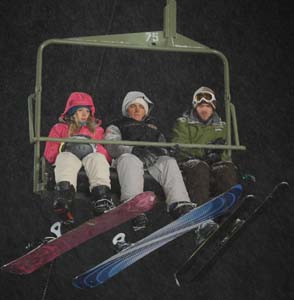 Remember the 2003 indie sensation Open Water about two scuba divers fighting for their lives in the open sea after being left behind by their diving boat? Replace the ocean with a stalled ski lift and you have the premise for Frozen. Although I’m using a cut-and-paste studio tagline, the movie isn’t as cut-and-paste as the premise might have you believe.

We’ve all played the what-if game with friends. What would you do if being chased by a homicidal maniac? What would you do if you were home by yourself and heard a strange noise outside? In fact, the three characters in Frozen play that exact same game in the beginning of the movie and then are forced to play the game for real. What would you do if stuck on a ski lift, high above the ground, at a ski resort that’s not only closed for the night but closed until the next weekend?

A lack of communication, a work schedule snafu and a need for urination combine to cause the lift to shut down before the three riders get to the top. At first, they assume there’s a glitch of some kind. But when the lights go out up the mountain, one by one, the skiers realize that this is not some little glitch.

As they realize the severity of the situation, I too, started playing the what-if game. I kept saying I would jump. Then the movie introduces a pretty good reason not to jump. No matter what you do, there’s huge risk involved, so which risk is least unappealing?

Just as Open Water before it, Frozen convincingly portrays a sense of isolation and powerlessness. People are aware that an earthquake, a fire, a mudslide can happen anytime and without warning, and sometimes there’s little we can do. But what if Mother Nature raised the stakes in a damned-if-you-do, damned-if-you-don’t scenario. What would you do?