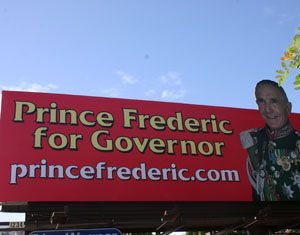 He may have reached some level of celebrity status by earning the title of Zsa Zsa Gabor’s ninth husband, but German-born socialite Prince Frederic von Anhalt now hopes to capitalize on his supposed fame by becoming the 39th governor of the state of California.

In spearheading a campaign entitled “Return the Good Life to California,” Prince Frederic formally announced his candidacy for the governorship at a press conference Jan. 25 underneath his inaugural campaign billboard on the Sunset Strip. The centerpiece of the socialite’s gubernatorial campaign is to assess a “Sin Tax” to help solve California’s massive debt.

“California needs money,” Prince Frederic, running as an Independent, tells the press about his plan to make the state solvent again. “But there are other ways to make money.”

He says the biggest problem in the state is that administrators and legislators spend more money than is available.

“Don’t spend what you don’t have,” the gubernatorial candidate says. “That’s what I learned in school. My family raised me like that. So why don’t they [the state] do that?”

Among the proposals Prince Frederic says he would institute if he were in office include the legalization and taxation of marijuana and prostitution, an additional 10-cent tax hike on all alcoholic beverages sold in restaurants and lifting the ban on Cuban cigars and products. Other campaign proposals: an additional one dollar levy on all cigarette packs and liquor bottles sold, as well as the opening of the Mexican border.

“For instance, [we can] legalize marijuana,” Prince Frederic points out as a possible viable solution to save California from bankruptcy. “It’s a big industry. It’s income for the state. It will happen anyhow one day.”

Prince Frederic says he was motivated to do something about the state’s financial woes when he received his latest car registration bill from the California Department of Motor Vehicles.

“It started when I got my DMV bill for car registration. For 2010, I have to pay $600 more – a $600 increase in one year. This is ridiculous,” Prince Frederic quips. “You don’t have to raise the DMV fees. This hurts the working class … very much. They rely upon transportation to get to work.”

Yet, Prince Frederic’s platform seems to focus less on attending to the needs of society’s “lower” classes and instead paying great heed to instituting his proposed “Sin Taxes” to help increase the state’s revenue while, in his opinion, also fighting the crime rate.

“[Legalizing marijuana] cuts the crime rate. If it is legalized, users do not get arrested for using it,” the socialite states. “If you legalize marijuana, it becomes less expensive. It will become cheap like it is in Europe, so people don’t have to hit their parents upside their heads in order to get the money to pay for marijuana.”

When asked what other illegal activities he would make legal if in office, Prince Frederic says he would legalize prostitution in an attempt to minimize sex crimes.

“Prostitution is the oldest business in the world! It has to be legalized,” the gubernatorial candidate says with a fever pitch. “It has been going on and on forever, and it will continue to go on and on forever, so why not legalize it and cash in on it and get taxes on it! ... Since the world existed there has been prostitution, why shouldn’t it be legalized? Why shouldn’t they pay taxes, like we all do?”

In making his passionate pleas, Prince Frederic ultimately says his campaign is all about bringing the “Good Life” back to the most populous state in the country.

“When I came to California 26 years ago, we had the ‘Good Life,’” he says. “We were prosperous. People had jobs, affordable homes and money to spend. The economy was great. I loved the state so much that I decided to make my home here and become a citizen.”

He adds that his decision to run for governor was ultimately based on what he believes is the overall deterioration of the state over the past decade.

“About 10 years go, things started to deteriorate, and last year, when the state was at its worst, I decided I had to try and make a difference,” he says. “I decided to enter the political realm and get California back on track.”

However, Prince Frederic has next to no political experience on his resume, nor is he officially recognized as royalty. An adopted son of Princess Marie-Auguste of Anhalt, Prince Frederic was born in Germany in 1945 as Hans Robert Lictenberg to a police officer.

Still married to Zsa Zsa Gabor after exchanging vows with her in 1986, Prince Frederic has been no stranger to public controversy. In addition to an alleged affair with Anna Nicole Smith, the gubernatorial candidate was in a paternity battle over the former playmate’s orphaned daughter. A reported DNA test in April 2007 concluded Prince Frederic was not the father. He was also found naked in a car after he was allegedly mugged by three women in 2007, according to a CNN news report.

Prince Frederic garnered infamous attention for his willingness to accept money in exchange for adopting adults, all in the name of allowing the adopted adult to take on the “Prinz von Anhalt” name. At least four men have reportedly taken Prince Frederic up on his offer, with each paying an estimated $1 million (or more), an Associated Press story stated.

If he were to be elected governor, he would be California’s first head of state born in Germany, following the precedent of immigrant state leaders set by current chief executive Arnold Schwarzenegger, who was born in Austria.

Associating with none of the state-approved political parties, Prince Frederic formally announced he is running as an Independent.

The California general election is scheduled for Nov. 2, with primaries set for June 8.

Former California governor and current state Attorney General Jerry Brown is among the most notable of candidates in this year’s gubernatorial race; he is running as a Democrat and served as the state’s chief executive from 1975 to 1983.