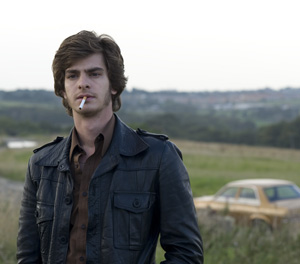 Red Riding Trilogy is a labyrinthine work about a series of murders in Yorkshire and the horrible ring of corruption that accompanied them. The three films take place over a span of time that is just shy of a decade, so expect to pay close attention to names and faces, as many of them will overlap from one film to the next. This dark trilogy of films were originally broadcast in the U.K. on Channel 4 in early 2009, but are being released theatrically in the United States this month.

The films are loosely based on facts, albeit fictionalized to maximize dramatic effect. The narrative was lifted from a quartet of books by David Peace, whose writing can be favorably compared to the crime literature of Elmore Leonard.

Screenwriter Tony Grisoni wrote the screenplay for each film. No slouch when it comes to tackling tough adaptations, Grisoni previously scripted Fear and Loathing in Las Vegas for director Terry Gilliam. That each film can stand on its own as well as serve as a larger piece of narrative is a testament to Grisoni’s abilities.

The cast is a stellar example of some of Britain’s best thespian talent. Many of the actors portray characters that appear in all three films. One character may appear only as background in one film, while later emerging as a central character in another and vice versa. Most notable among this cast of characters is Detective Maurice Jobson, played by a remarkable David Morrissey, whose character becomes steadily more important until he takes the center stage in the third film. His character arc in Red Riding - 1983 is all the more powerful when having taken into account the actions of the previous two films.

While Grisoni takes sole screenwriting credit, each feature of the trilogy is helmed by a different director and photographed with a different film stock; so all of the movies have a very distinct look and feel to them. Even though the trilogy is meant to be watched in sequence, so as to understand the larger narrative, it is easy enough to view the individual movies as stand-alone pieces of cinema. It is a tricky proposition, to be sure, but it pays off handsomely in this well-mounted production.

Red Riding - 1974 is the first of the trilogy, and in my opinion it is the best of all three films. Shot in 16mm and directed by Julian Jarrold, the film stars an electrifying Andrew Garfield as Eddie Dunford, a novice reporter that begins looking into the disappearances of several girls after one of them is found murdered. Though all of the Red Riding films are considered crime dramas, Jarrold’s entry is the one most steeped in traditional film noir tenets. Sean Bean plays the mysterious John Dawson, the area businessman that seemingly has the local police in his pocket, while Rebecca Hall plays Paula Garland, the femme fatale that pulls Dunford into the thick of a vast conspiracy. The 16mm stock imbues the film with a spectacularly gritty look that is emboldened by period appropriate dress and décor. Garfield is most impressive as Dunford, the doomed anti-hero that finds himself way over his head.

Directed by James Marsh, Red Riding - 1980 eschews the flashy grit of the previous film and adopts a much more polished look, being filmed in 35mm and helmed more as a straight drama than a shadowy exercise in doom and gloom (though there is plenty of that). This second installment uses the police procedural format to examine the depths of corruption among the Yorkshire police, while broadening the themes and tying loose ends that began in the first film. Paddy Considine takes the lead in this entry, giving a strong performance that is at once a portrait of dogged determination and quiet vulnerability. The plot twists and turns, leading to a climax that mirrors Considine’s performance, at once rewarding his determination and punishing said vulnerability.

Red Riding - 1983 was directed by Anand Tucker. It was shot using the Red One digital camera, and the end product is beautiful, a crystal clear ending to a murky trilogy. This last installment stars David Morrissey as Maurice Jobson, a remorseful detective at the heart of the Yorkshire corruption, and Mark Addy as John Piggott, a slovenly public solicitor that begins to piece together the clues that the police have tried to bury. The film is largely about redemption, and both of these men are in dire need of it. Unfortunately, and keeping in line with the rest of the series, their quests take them to some expectedly dark places.