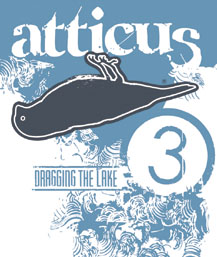 Wouldn’t it be strange to see a kid wearing baggy Sean John jeans, a G-Unit T-shirt and a backward Raiders hat at a Marilyn Manson show? It seems that people are now proudly displaying in what they wear the style of music that’s stuck in their heads. Punk rock has its Mohawk, hip-hop has its oversized clothing and country has its cowboy hats and Texas-sized belt buckles, proving that for years, fashion and music have been intertwined. It was only a matter of time before musicians started designing their own clothing for bands and fans alike.

For the past four years, L.A.-based Atticus Clothing, started by blink-182 members Mark Hoppus and Tom Delonge, has taken the idea of mixing music and fashion to a new level.

“The only goal we had when we started was to be creative, have fun with our friends and support the bands,” Hoppus says.

Atticus originally slapped their logo, a dead bird on its back, onto T-shirts that sold in specialty stores and at rock shows. Over the years, the Atticus line has grown to include button-up shirts, jeans, shorts, headwear, accessories and a girls’ clothing line. After seeing such bands as blink-182, Coheed and Cambria, Fall Out Boy and Yellowcard sport the duds, fans eventually caught on and Atticus began to grow in popularity on the rock scene.

“I think it’s all about expression and creativity,” Hoppus says. “We started the clothing company inspired by and in support of musicians. “When blink started, we weren’t able to afford to go on tour. With Atticus, we’ve bought a bunch of vans and we loan them out to bands so they can go on tour,” Hoppus explains.

Aside from helping bands get out on the road, Atticus has teamed up with SideOneDummy Records to release Dragging the Lake, a compilation CD whose first and second installments sold over 150,000 copies each, and whose third installment releases on Feb. 22.

Dragging the Lake 3 features songs from musical veterans like blink-182, Taking Back Sunday, MxPx and Death Cab For Cutie but also delivers tunes from lesser known bands such as Bedouin Soundclash, Mae, and The Bled to listener’s ears.

With great designs and even greater marketing, Atticus has proven that there’s always a chance for a company or band to get started and stay successful.

“The company grows every year and we’re stoked that we’ve been doing well,” says Hoppus with a smile. “We have a lot of new projects in the works, and it’s going to be fun.”

Atticus Dragging the Lake 3 releases on Feb. 22; a pre-order special is available at www.loserkids.com. The Atticus Clothing line can be found at Pacific Sunwear and Tilly’s retail stores. For more information or to order online, visit www.atticusclothing.com.

Clothing
Mirror, Mirror: ‘The Force Awakens’ fashion is with you
4,047 views

Clothing
Designer hopes to make ‘made in Jersey’ a fashion statement
1,694 views

Clothing
Frederick's of Hollywood closes all stores, strips down to Web
1,593 views