Hot Chip: “Over and Over” Again 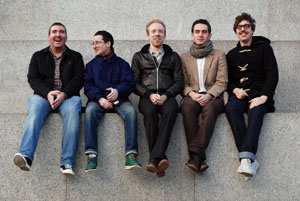 I’ve been a fan of Hot Chip for years and jumped at the offer to interview them. Their new album, One Life Stand, hit the streets earlier this week, and the reviews have been nothing less than great.

For those of you not too familiar with this London-based band, they are classified as playing electro pop-dance music. I spoke with Joe Goddard, who makes up one-fifth of the group, playing percussion, synthesizer and vocals. The other members are lead singer Alexis Taylor, Owen Clarke, Al Doyle and Felix Martin.

“I don’t even remember how we came up with the name of our band,” muses Goddard. “It was 13 years ago, we were at school and it seemed like a funny name at the time and it kind of stuck.”

One Life Stand is stripped-down with a more mature sound and feel to it.

Goddard says, “You can’t really think of the audience when creating your new album, it would be cynical if we made a record thinking this is what the audience would like. You’re heart and soul wouldn’t be in it.”

He continues, “We consciously wanted to do something that was a little less aggressive and less loud and a bit different than we have before.”

The album almost takes you back to the roots of their first album, with more melodic ballads like “Alley Cats,” one of Goddard’s favorites. Of course, they have their key dance tracks like the title track, a song about making a lifelong commitment to that one special person.

Hot Chip is about to kick off their 2010 tour in February, and the audience does come into play while performing in venues around the world.

“When the crowd is amazing, that makes such a difference,” affirms Goddard. “In Glasgow, Scotland, the crowds are fantastic, they really go for it, get drunk, sing along, jump – and that really makes it so much fun to play.”

As for his favorite cities in the United States, he says, “Chicago is so much fun for us, and there are tons of record shops that I visit. San Francisco is incredible, too.”

I wanted to really find out what it was like for them on the road when they embark on their journeys.

Goddard wisely answers, “I most of all miss my wife. Sounds cliché, but it’s really hard being away from the people you love.”

Things can get pretty gritty while on tour, and the band can “really piss each other off quite often, like a brotherly thing,” Goddard shares. “We know each other inside out, and we can get annoyed about it and fight.”

In the end though, Goddard says, “If I’m away from the guys for a while, I have a strong desire to see them again and get in the studio.”

Teaming up with other artists is one of the nice perks for the band. They just performed on “Late Night with Jimmy Fallon” with the Roots, which Goddard describes as “a bit weird.”

“We were nervous to perform with them. We’ve been fans of theirs for such a long time, and in the end it was really quite fun and good, but TV programs are weird,” he expresses. “You spend so much time backstage doing nothing and then get rushed to the stage to perform immediately in front of all the cameras and people.”

“Anytime you perform, you basically want people to have a great time, not standing there with their arms crossed looking bored. It’s a wonderful thing when the crowd is into it,” he adds.

One of their favorite festivals to perform is Coachella, where they will perform again for a third time.

“It’s such an incredible atmosphere; the tents are always bursting with energy. I really love it,” Goddard remarks. “They book great bands, and this year I’m looking forward to seeing Pavement and Devo.”

When not on the road touring and promoting their albums, Goddard confesses that one of his other creative outlets is cooking.

“I love cooking Thai food, and making green curries and Thai salads. I find that I miss that when I’m on tour,” he states. “When I’m at home it feels really therapeutic, but while on the road we try to have proper meals. We enjoy getting out, and that is one of the best things when touring.”