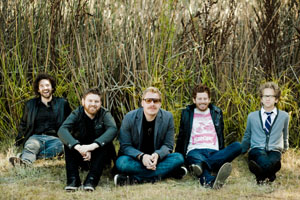 Two thousand and nine was a hard year for California pop-rock band Sherwood. In fact, it may have been the most difficult one the band has ever had to deal with.

“It’s been a tough year for us as a band for lots of reasons, not just musically but in life,” vocalist/bassist Nate Henry admits. “The money’s not there for artists as much. MySpace wasn’t as big of a presence. We felt like in a lot of ways we’re just like farmers trying to create enough demand to keep going. When you get older and you want to settle down and live your life a little bit, it’s hard.”

Henry himself went though a tough breakup with his longtime girlfriend, while recently it was announced the band’s record label, MySpace Records, is folding.

“We’re actually in probably a better place than people on the outside looking in think. The nice thing is all the budgets were approved for a year, so we’re not without the budgets to do what we wanted to do,” Henry notes. “We were free agents after this record anyways, so in a way it helps to further along that process.”

Some of that negative energy was harnessed for the band’s third full-length album QU, pronounced as Q and released last October. While the title itself is a sly stab on the fact that album titles are in and of themselves essentially meaningless, the record tackles serious topics like death and divorce, although often it’s accompanied by catchy melodies and group harmonies not heard since the days of the Beach Boys. The band spent the better part of a year working on the record, holing up in an Oakland apartment for six months where it wrote 85 demos before recording the album in Los Angeles with acclaimed producer Brad Wood (Smashing Pumpkins, Sunny Day Real Estate).

“It’s really hard to dig through your sound and also improve and push yourself as an artist and create songs that you’re going to love playing every night on stage,” Henry says. “I think when you put out a few songs and start touring you realize, ‘Oh, I’m going to have to play this song every day for the rest of my life.’”

“I feel like I finally came to a place where I had something to say as an artist [with this record],” he adds. “We’d toured and I had met people and had lived enough life to say, ‘Hey, this is what I think about it. This is some struggles that I’ve been through. Here’s some things that I think about it.’”

The goal was to make something real and authentic that would still resonate with listeners 10 years down the line, which sadly has been reduced to something of a rarity these days.

“What people consider music now is really depressing,” Henry admits. “What’s selling, it just sounds like someone typed a bunch of words in Google, pressed enter and got this list of junk and they’re just rapping over it. They’re making these techno beats on their computer, plugging it all in and singing about, in my opinion, some of the most worthless stuff. I know it’s catchy, I guess, but I just thought that music had something to say and had a message.”

“We’re not Radiohead or Björk by any means, trying to be this band that is the pinnacle of expressing music to the masses,” he continues. “We’re still a pop band, but we’re trying to do something that at least people can relate to and actually think about their life and think about what’s going on.”

Meanwhile, Internet rumors have been circulating for months that QU will be Sherwood’s final record, something Henry is quick to point out the band members themselves have never actually stated.

“We would love to continue this band but there definitely is the reality that your band has to be a certain size to make a full-time job out of it,” he notes. “I don’t think a lot of music fans understand what that looks like. They think that if they see your songs on TV or some ad online that you’re, like, a rock star and making tons of money, but I think that most band members are just scraping by. If Sherwood doesn’t make another album it would be because the system killed the band and not because the band killed itself.”

Henry remains optimistic that this isn’t the end of Sherwood. The members are in it for the long haul, even if they have to put out their next record on their own, and that’s really what the group has come to epitomize.

Sherwood will perform Feb. 17 at the Roxy. For more information, visit myspace.com/sherwood.

Interviews
How a trans indie-rock star made the record of their life, with the help of some new housemates
1,041 views

Interviews
Boys will be Baby Boys in the latest spinoff album from Hippo Campus
1,004 views