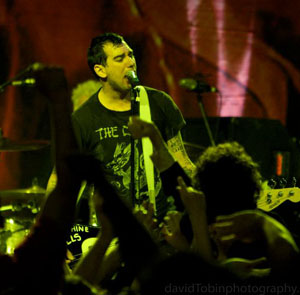 Even with a replacement guitar, Anti-Flag sounded like a well-oiled machine.
(Credit: David Tobin)

Despite the fact that they suffered a death in their immediate family, this band went on. Justin Sane left the tour, and as the band contemplated canceling the whole thing, they did something that we don’t see very often in entertainment anymore: They thought of the other acts who were supporting them on this tour.

Anti-Flag could have easily told the rest of the bands on the tour that they were going to call it quits because their guitarist wasn’t going to be with them due to the tragedy in his life. But instead, they said, “We can get someone else to play guitar.”

Bassist Chris #2 informed the audience before starting their set, “These bands are out here supporting us, the least we can do is keep them on the road and give them the same respect that they’ve given us. So we got a friend of ours to learn all our songs in a day.”

And with those words the band tore into a set that exemplified how they’ve grown over the years. Even with a replacement on guitar the band sounded like a well-oiled machine. Ripping through song after song, the fans got more than they paid for.

The floor at the Fonda was alive instantly. Bodies flying all over and smiles painted on everyone’s faces, it seemed like this band commanded the crowd to use all the energy that they had for every single song in their set.

Of course, it wouldn’t be an Anti-Flag show without some kind of random chaos. So, when Chris #2 told two guys in the pit that were starting fights to kiss or get out, it was right on par. And the two didn’t want to leave the show, so they puckered up and actually kissed Chris and drummer Pat Thetic. The crowd went nuts and the positivity raged on throughout the night.

Anti-Flag have once again given Hollywood a much-needed punk rock kick in the ass.