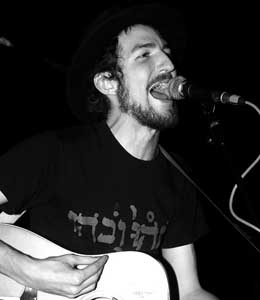 Guys with guitars singing folk songs are a dime a dozen, right? VH1 has practically built their whole playlist around 20-something guys being emo behind a guitar or piano, but Frank Turner is a little different. Maybe it’s just the cultural ignorance talking, but how often do you hear a British dude sling a guitar with a Southern twang and have the attitude of an east coast street punk?

From biting and pointed to disarmingly honest and revealing, Turner maintains a sharp lyrical wit regardless of his song’s intent. Not afraid to poke occasional fun at both himself and his audience in his between-song banter, Turner showed an intelligence and charisma far beyond his years and far beyond his contemporaries.

Inspiring a full venue sing-along with tracks like “Photosynthesis” and “The Road,” Turner showed just how much his music can resonate with an audience. Even when taking on more serious subject matter, it’s near impossible to not feel good while listening to Turner growl and wail into a microphone.

Showing just how broad his influences are, Turner even went so far as to tackle a traditional English folk song a cappella, effectively making a song more than 300 years old feel relevant and completely at home on his set list. Now how many American indie-folk singer-songwriters can you name who can pull something like that off?