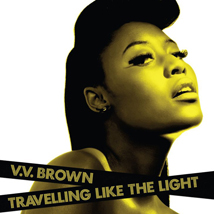 VV Brown may very well be the kookiest, craziest thing to happen to Brit pop since, well Amy Winehouse, but no one’s listening. The statuesque Northampton-born singer’s U.S. debut, Travelling Like the Light, hasn’t received much airplay stateside. The 26-year-old singer-songwriter (She has penned tracks for Sugababes and the Pussycat Dolls.) has retro pipes and a self-described “doo-wop indie” sound; she’s just not exactly original. If you could mix Adele’s raspy vocals with Lily Allen’s quirkiness, the result would be VV Brown.

Travelling Like the Light should be taken for what it is: a cheeky pop album. I can only imagine that half the tracks were written about a bad breakup with a James Dean-esque bad boy (She should have known he was up to no good.).

Admittedly, “Shark in the Water” is a catchy dance track with a massive chorus. “Game Over” is a girl power anthem fused by one haunting hook. “L.O.V.E” manages to stay true to the singer’s rockabilly roots, but the song fails due to constant mugging. Nice try VV, but I’ve heard this before and it was done a lot better by Winehouse.